Can you deal with another extended metaphor?  You’re strong; bear with me.

Landscape photography is a hunt.

No, I’m not a hunter.  I eat meat; I just internalized the “do no harm” part of being a physician to the extent that I don’t think I could.  I’d understand if you think me a hypocrite.

So, my friends who hunt tell me that the killing is a rather small part of the experience.

They say that, much like what I do in the field, there is joy in the skill development and planning.  Hunters also say that the quiet stalking requires patience and that there’s never any guarantee that you’ll come home with a trophy.  Mostly, though, they tell me that it’s about meditative time in the wilderness.

So, last week I started exploring some areas included in magazine “stock call lists.”  I blogged about this process last summer.  It's certainly an arrangement that works more in the magazine’s favor than the photographer’s, but I do appreciate the honor of being on the list as well as an introduction to some parts of the state that I wouldn’t otherwise have experienced.

These trips are hunts, from time spent pouring over Google Earth (really, you should see the number of pins I’ve placed) to quietly waiting for the evening light to warm and mellow.

Between Ash Fork and Williams, there’s a neat forest road which snakes through the flagstone quarries and in part parallels the railroad tracks.  The trains made fun subjects during the day, but not such great camping companions.

My goal in the Kaibab Forest was an old stage stop, but the road turned to axle-sucking mud before I got there, so I’ll have to try again in drier times.  Instead I hiked the Red Mountain Fire Lookout trail and was treated to fabulous 360-degree views and fast-moving thunderstorm cells.  Later I got some intelligence about a historical attraction in the area, but that’s a post for another time.

From there, I headed to Prescott back roads.  At one point I was in the middle of a 7-car-standoff between "I can't back my trailer" and "I'm afraid to back up; I'm from Phoenix." We got it done. I drove two wheels up the mountainside and pulled in my mirrors for a solution fit for Rubik’s Cube. Yikes.

After a quick trip home for a can’t-miss surprise 35th anniversary party, I photographeed the Blue Range at the New Mexico border.  It was a beautiful spot and nice camping, but I got distracted by the prodigious wild iris bloom and before I knew it I was near Big Lake in the White Mountains.  There I found storm light and more iris.

It was a good hunt.

More images are in the Northern Arizona Gallery on Skylineimages.net

Thanks for the visit and happy hunting.
Posted by Rebecca at 1:42 PM No comments:

I’d been looking forward to visiting the California Coast Redwoods for some time.  I’d dreamed of fog in the groves and rhododendrons blooming everywhere. 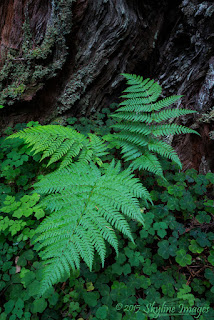 I’ll spare you my eloquence about making lemonade.  I guess that’s what happened, but really, I can’t complain about (up to) 2,000 year-old majestic trees, pristine ferns, spring flowers, and the rugged Oregon coast.

These forests have been preserved through an energetic public-private partnership.  Over 95% of the original old-growth trees are said to have been lost to logging, so the protected areas are truly precious.

It was quite a privilege to experience this place.  I’ll be back, despite having inhaled a few mosquitoes.

More images from this trip are in the Northern California Gallery on the website
Posted by Rebecca at 8:07 AM No comments: