My traveling companion was clearly getting tired of hearing me say it, but it’s getting crowded out there. Sorry, Tim; I’m going to talk about that a little more here.  Some places we visited last week were prohibitively busy.  Slot canyons, for example, are not so much fun with a steady stream of people coming through, kicking up dirt and knocking me into my tripod.


I’m sure that this phenomenon has more than one cause but the Instagram syndrome surely plays a large part. There’s also the current camping vogue.  Trends come and go, of course.  I was overlanding before it became popular, and I’ll be doing it after the thing passes and might even take advantage of a great deal on a used camping vehicle when it does.


The famous places we visited were full of people.  Those that I’ve been frequenting for the better part of a decade were quiet (even lonely) then.  At Horseshoe Bend, for example, sunrises ten years ago were a solitary affair.  About a year ago, my last visit, there were easily 100 people there.  The Glen Canyon National Recreation Area is currently building a larger parking lot, restrooms, and pay stations at Horseshoe.  Really, what choice do they have?


That being said, we also had some quiet times on this photo tour, organized by Kerrick James (K J Photo Safaris) and guided in part by Brent Johnson out of Kanab. More on that later.

One way to find solitude is to shoot at night, and that we did.  Devil’s Garden is in Grand Staircase Escalante National Monument.  This shot includes the famous (and well-visited during the day) Metate Arch, naturally light-painted by the last light 45 minutes or so after sunset.

I’ve already whined about the slots, and I’ve really only got one shot that I like from that morning, from Spooky slot.  It’s a good thing I shot its neighbor, Peek-A Boo Canyon, several years ago.

Another thing that keeps crowds out of well-known places is the need to hike.  Broken Bow arch was a new spot for me, and the four of us were delightfully alone down there.  The midday light isn’t ideal, but perhaps I’ll get a permit and spend the night down there one day.


The hike to Broken bow yielded some lovely detail shots as well.

Luck gave us a few minutes more or less to ourselves at Lower Calf Creek Falls.  It was a wet winter in the Southwest, so we were fortunate with the high flows as well. We started passing people on the hike back. And more people.  I’d say there were 200 in all.  You can imagine what the parking situation was like.  My advice: go early. 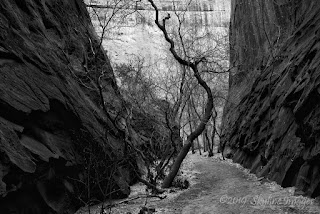 Photographers say that the way to make harsh or overcast mid-day light work photographically is to use black and white.  We had a little drive-by at Long Canyon along the Burr Trail and that wisdom worked out well for me.

Speaking of drive-bys, we spent an hour or so in Bryce Canyon National Park, taking advantage of the last bits of snow among the hoodoos.  I expect people there, and there’s plenty of room, so the crowds weren’t so much of an issue.  Well, except when (ahem) looking for a place to relieve myself discreetly.

Coming down 89A from the Kaibab Plateau, we say expanses of purple.  I’ve never seen this before, and I don’t know what the flower species is (help would be appreciated), but they were very photogenic in the House Rock Valley Road area.

White Pocket. I’ve camped there about 8 nights in the last ten years or so.  There’s hardly ever been anyone there other than my group.  It’s perhaps the worst example of the Instagram syndrome we saw; we were inundated.  There were about 25 people camping, some out on the rocks themselves rather than in the usual (away from the photogenic stuff) camping spots.  People had hung glow-sticks (presumably for night navigation) and were flying drones.  The most positive thing I can say about all this is that there’s a creative challenge inherent in composing images in order to avoid 15 photographers in my foreground. This is a special place, but I might not be back. 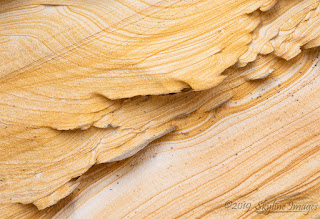 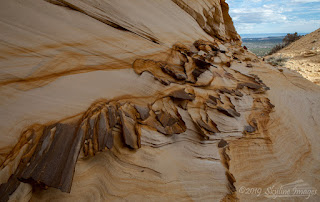 Finally, the undisclosed location.  I’m so grateful to Brent for the opportunity to see and photograph this alcove.  In addition to the grandeur of the architecture, this place has delicate, untouched rock fins whose beauty broke my heart. I’ve written about this before.  Perhaps it’s inevitable that this place will become known, but I’m committed to not publishing its whereabouts on the internet.  Not on my watch.


So at the end of our adventure, there was this magical place not yet reached by the Instagram syndrome. What a privilege.


More from this adventure can be found in the Utah Gallery on the website.
Posted by Rebecca Wilks at 10:50 AM 4 comments: