“We were somewhere around Barstow on the edge of the desert when the drugs began to take hold.”


I know, that’s not exactly the kind of inspirational quote you’ve come to expect from me.  It’s all true, except that the “drugs” were ibuprofens.  I’ve been feeling a little creaky.


How about this, instead?


“Frustration and conflict are messages from the universe that it is time to back off.  When you find your center again, act.”


I couldn’t count the number of times I changed my mind during this last trip to the Mojave National Preserve.  I like to think of myself as mostly decisive, but there was weather, unrelated road closures, and my “spidey sense.”  That is, I started down a road and decided to turn around because of the prickly, uncomfortable feeling on the back of my neck.  In the end, none of my three camps were in the places I’d planned.  Not to worry; those other spot all landed on a list for the next trip.

I had some unfinished business near the Hole-in the Wall Campground.  As I headed out of Arizona, I was thinking about stories of the trash and overflowing restrooms on Federal Land since the government shutdown, then 23 days old.  Besides, Mojave is famous for its dispersed camping (also known as boondocking; camping outside campgrounds) and I tend to avoid campgrounds when I can, so I thought better of it and found a nice quiet spot with caves to explore.  I drove up to the campground the next morning and though skies were too overcast for what I’d had in mind (that project also goes back on the list), I was pleased to see that the campground and picnic area were in great shape.  No doubt a group of volunteers were carrying out trash and cleaning restrooms.  We’ve been seeing this inspiring phenomenon all over the country.

That day remained socked-in overcast.  I drove for hours and scouted some new locations for camping and photography.  This was the day I changed plans because I got the creepy feeling. There was rain in the forecast, so I needed to find a place that I could get out of safely if the washes were running.  As the signs say, “Turn Around, Don’t Drown.”  I ended up at Kelso Dunes.  I’ve never camped there before and though it’s a pretty popular destination, I was all alone out there.  In the rain.  I hunkered down in the camper reading and writing and trying to convince myself I didn’t have cabin fever.  Don’t get me wrong; rain in the desert is a blessing, and there’s nothing like the smell of wet creosote.  Still, I hoped for a break in the weather before dark but as a friend says, “hope is not a plan.” I’d add, “meatloaf is consolation.”

The next morning there was low fog which created nice conditions for moody black and white images. Extraordinary conditions are fabulous for photography.


This was the morning that the Alan Cohen quote showed up in my email in-box.  Find my center, indeed.

The plan for my last night was to check out a new, super-secret location.  I changed my mind repeatedly during the drive.  It turned out that the road was closed (or maybe not, I found out later.) I’d all but decided to head home a day early when the pea-soup fog rolled in.  Unwilling to join the semis on I-40 in that morass I decided to stay at Granite Pass. I’d been there before and hoped (that word again) for good conditions when the storm cleared in the morning.  There was some nice light at the end of the day, but only after another afternoon of reading and pondering in the downpour.  Sadly, the next morning was disappointing, but the solitude was grand.


More images from this trip are in the Southern California on the website.

Posted by Rebecca Wilks at 2:18 PM No comments:

Yes, here I am again.  I’m feeling nostalgic and grateful for another full year, punctuated with images.  Perhaps it’s my imagination but editing for this project only gets more difficult with time.  The alert reader may notice that I’ve cheated a bit on my “one per month” rule.  It’s good to be queen.


As many of you know, I lost Luna, my canine traveling companion, this month.  I dedicate this missive to her, pictured above.


I hope you’ll enjoy this, the seventh annual installment of the retrospective. 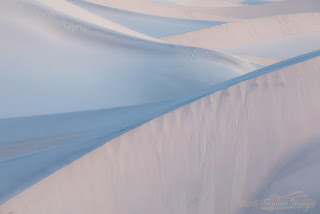 Death Valley.  I go there a lot, alone or with family.  This time I decided to mix it up a bit and go with a workshop.  I wanted to see this place through another set of eyes, so I signed on with Guy Tal and Michael Gordon.  These guys are great, as I’ve mentioned before.  A bonus was traveling with a dear friend and making some new ones.  I love this image because it’s almost abstract and takes advantage of the warm and cool pastels of the sunrise over Mesquite Dunes.  It represents a stretch in my way of seeing, which is one of the things I was after on this trip. 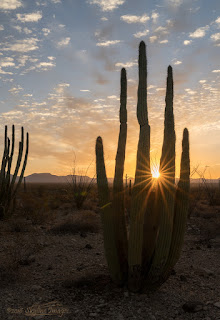 After 29 years in Arizona, I’ve just discovered Organ Pipe National Monument.  It’s close enough for a short camping trip and full of interesting stuff.  This sunrise behind the eponymous cactus was a short walk from the big campground.  I have a soft spot for this camping trip because it included Lurch’s 200th night out. 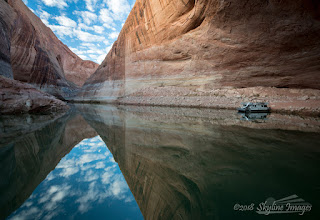 I used to belong to a photo club in which the leader made assignments each month.  His favorite was surrealism.   I tend to be more of a realistic landscape photographer, so these (oddly repetitive) assignments were a challenge.  This one I stumbled on, but I believe it qualifies.  What a delightful week on Lake Powell with Marco and friends, including the undisputed photographic expert on the lake, Gary Ladd.  This camp in the Escalante Arm of the lake didn’t look like much when we pulled up, but the extravagant sky and still water in the morning blew me way.  You never know. 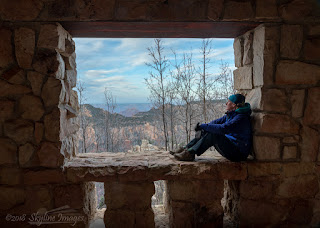 I’ve perhaps said enough about this trip to the North Rim.  Sadly, it might have been my last chance to be there before the park opens for the season May 15.  One of the fun things about that for me is that views like this open up before the trees leaf out.  This spot in the lodge, known as the Moon Room, is my favorite quiet place to read and commune, especially in the hot days of summer. 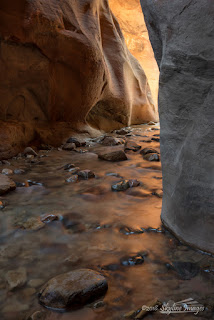 May was a busy month; wild horses, Moab, Arizona and Utah slot canyons and the Oregon Coast. This moment in Kanarra Canyon continues to move me.  There were five of us, and for some reason I was alone in this spot during the hike out.  The molten light was captivating.  After I shot it, I scooted back up the canyon to try and interest my companions, but they were engrossed in their own projects.  I tried. 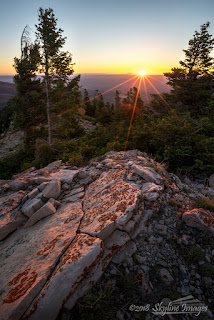 I’ve been to Marble Viewpoint a lot.  It’s a pretty cool spot, but I’d thought I was done creating fresh images there.  This one surprised me, taken in the gale-force wind that is so common there just as the sun crested the horizon to the right of Navajo Mountain, which eighty miles away.  I do love those bright orange lichens, too 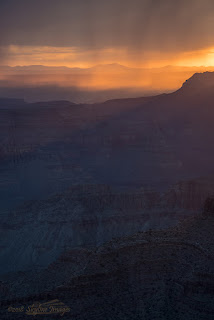 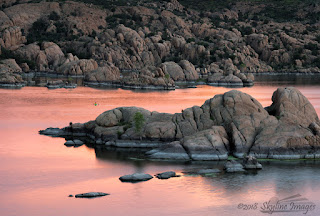 The more time I spend in Yarnell, the more shooting I’ve been doing in nearby Prescott.  Watson Lake is uncommonly beautiful, whether I shoot from my kayak or from the shore.  Mostly I was there to catch the rising full moon.  As often happens, though, the real show was not what I expected.  These reflections and the kayaker took my breath away.  Here’s a little geeky aside; from the vantage point of the trail, the top of the island overlapped the far shore.  Photographers call that a “merger,” and though they’re not all bad, this one was.  I’m sure I looked pretty comical, frictioning up the granitic slabs until I was high enough to eliminate the merger.  I’m glad I did. 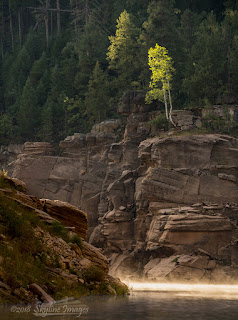 Blue Ridge Reservoir on the Mogollon Rim is not so popular in September.  It was a little chilly rigging the boat predawn and I paddled out wearing long underwear, among other charming attire.  The experience was already magical, all alone out there, and then I turned around and saw the sunlight on the fog and the aspens clinging to the rocks. Mystic light.


Like May, October was a delightfully busy month.  Unlike May, I just can’t choose between images of the three excursions.  Like last year, I’m breaking my own rule. 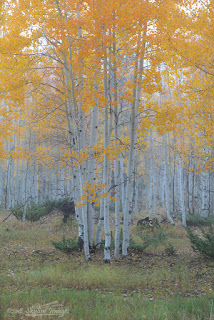 It seems I can’t stay away from the North Kaibab Forest when the aspens are turning.  I’ve done this trip for years, and I don’t see that changing any time soon.  This was the first time that there was weather.  Though I love the look of leaves brilliantly back-lighted by the sun, these low clouds and fog let me work with an entirely different feel and spectacular warm-cool color combinations.  Never mind I spent 4 days in my rain gear, constantly damp.  The shooting and the solitude were irreplaceable. 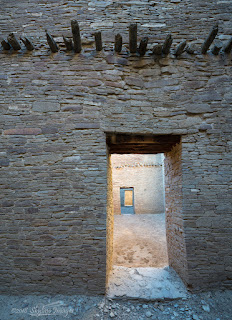 Chaco.  This shot has been done by others, of course, but the particular quality of light alternating room-to-room this morning was poignant. Again, I broke off from the group and was communing, this time with the ancients. 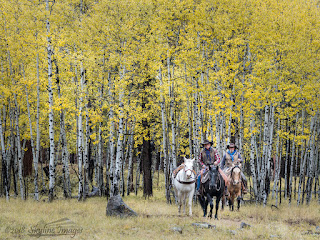 Scott Baxter set this one up as part of his workshop, so I can’t take full credit.  Still I love it.  If you ever get to X-Diamond Ranch in the White Mountains ask Wink, the owner, about the ten-dollar horse (the white one). 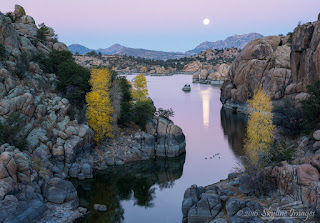 Choosing this month’s image was not so hard.  This may be my favorite for the year.  I planned this composition of the setting moon over Watson Lake painstakingly with photo and weather apps and walked a couple of miles in the dark in temperatures cold enough to freeze breath midair as it escaped. I didn’t anticipate the lovely yellow cottonwoods, nor could I see them when I started shooting.  They really make the shot and were just dumb luck. 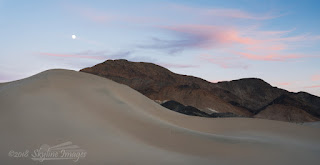 It’s challenging to decide on a favorite from a month that has just passed.  As time goes by I become objective and so more able to filter out the emotional attachment I have to the experience, rather than the image itself.  That being said, this one is my current favs. I love the peaceful subtlety of this image of Death Valley dunes from made during this year’s winter solstice trip.


As Casey Kasem would have said, "So there you have it. Keep your feet on the ground and keep reaching for the stars."


See you next year.
Posted by Rebecca Wilks at 1:05 PM No comments: