What a year.  I’m so pleased to have had the blessings of magical experiences, mentorship, and camaraderie (those last two are sometimes tough to distinguish) this year.  While I’m thrilled to have been included in a number of publications in 2014, the most satisfying one was the fundraising calendar I produced for the Peoria North Rotary Club.  I confess I’ve been putting this off for a couple of years but am so glad to report that it has exceeded expectations.  Thanks so much to all of you who bought, sold, or promoted it.  I’ve learned that the occasion to combine two passions is priceless (though the calendar was $15). 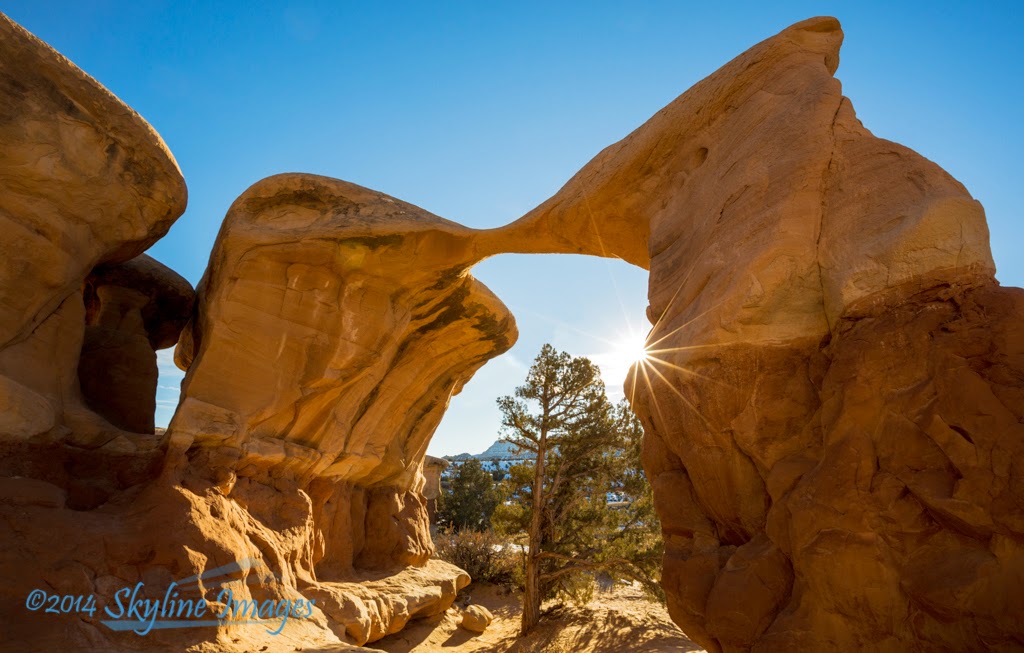 The snowpack in the west was dismal.  For the first time I can remember, Marco and I cancelled a ski trip and decided to do a road trip instead, to Grand Staircase-Escalante National Monument.  It was cold.  There were frustrations, like icebergs in the slot canyons.  There was no one else around, though, so we had the peaceful escape we wanted.  Here’s sunrise behind the iconic Metate Arch. 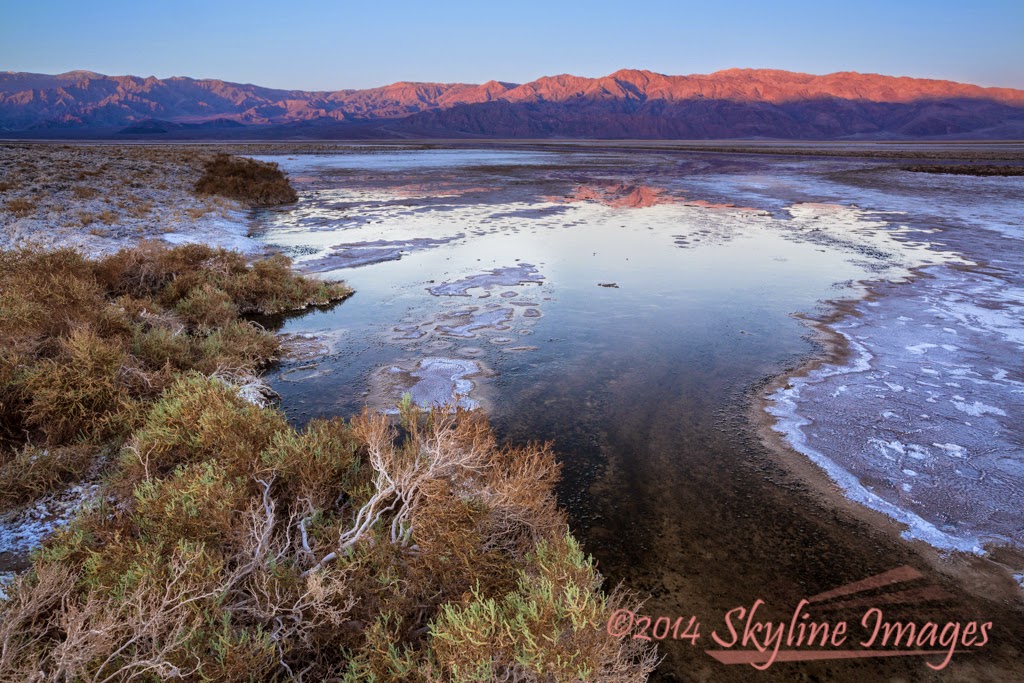 Yeah.  This is a story, but I’ve told it elsewhere. The camper broke down in Death Valley.  I made this image just a few hours before that, when I thought I had 5 more days to shoot.  I’m not a very emotional person as a rule, but I ran the gamut that day.  This is Cow Creek Seep and sunrise on the Panamint Mountains. 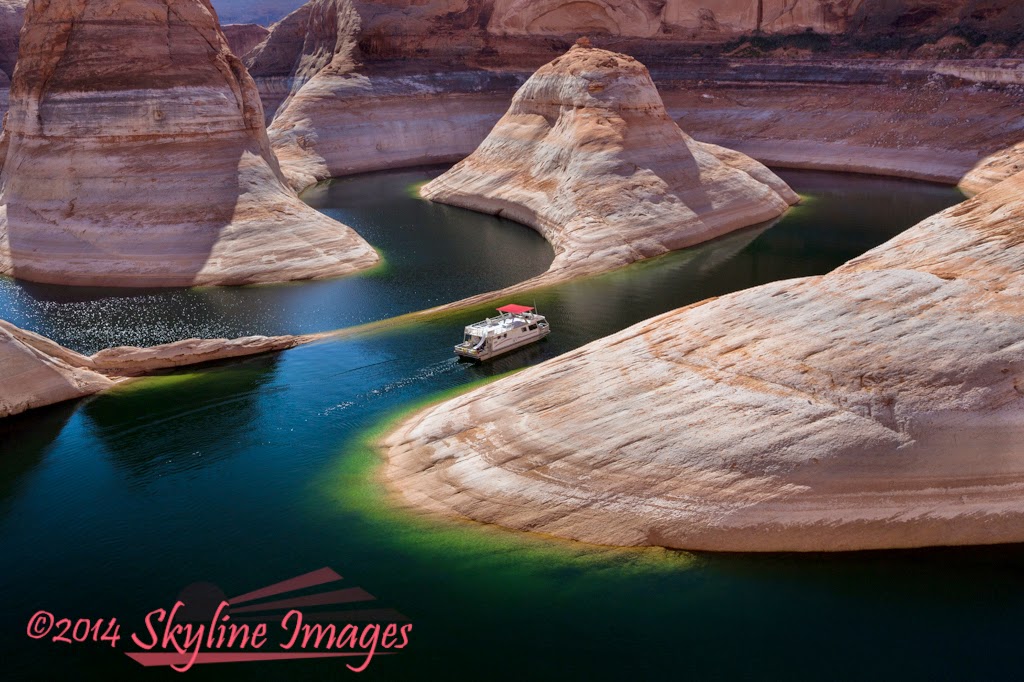 An opportunity to shoot Lake Powell with Gary Ladd is always a gift.  It was tough to choose my favorite among the images from that trip, but I’m particularly thrilled that this one was published in Outdoor Photographer Magazine.  I love the curves here, and the hint at what has been hidden under water since Glen Canyon Dam was commissioned in 1963. 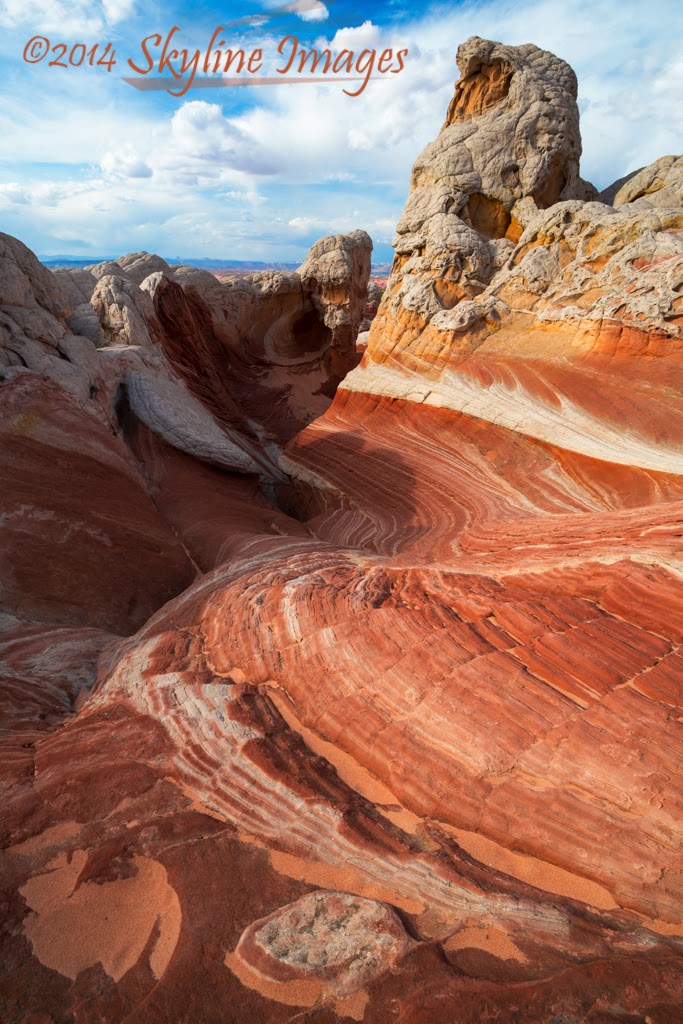 White Pocket, Paria Wilderness.  This place is becoming more popular, but the deep-sand road is doing a good job preventing it from being overwhelmed with visitors.  I introduced my husband and some friends to White Pocket this year.  I don’t think any of them were as thrilled as I.  Come to think of it, that happens a lot. 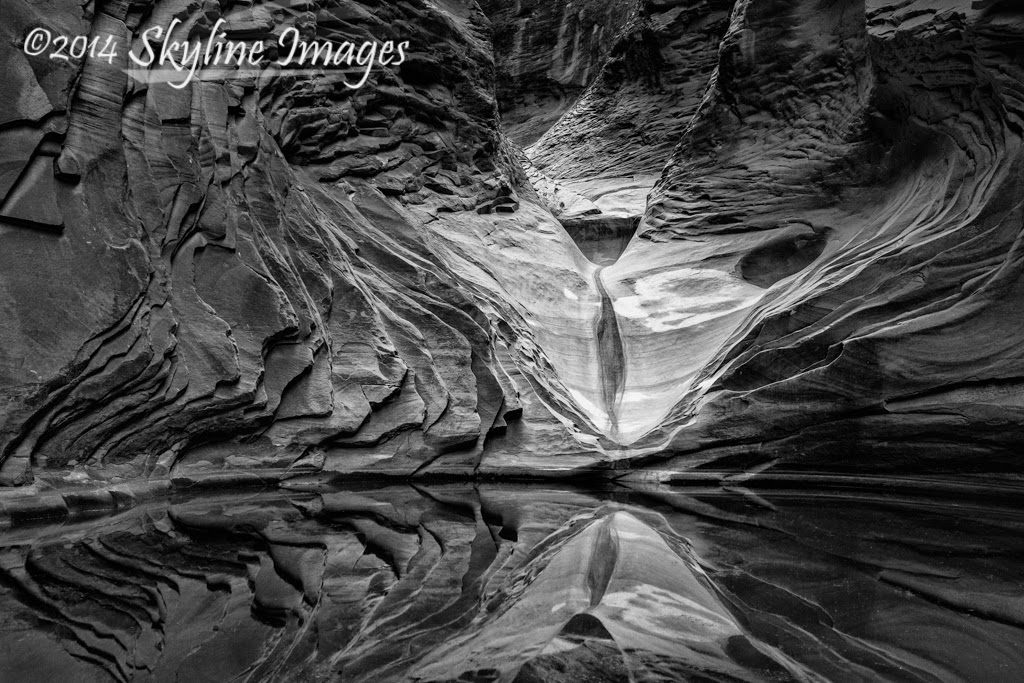 Grand Canyon by raft.  I know; again.  I’ve talked about this elsewhere, as well. Lest I duplicate images from that post, I’ve elected to share this (admittedly Georgia O’Keefe – ish) image of North Canyon.  The graphic quality and peacefulness of this grotto come right back when I look at this image. 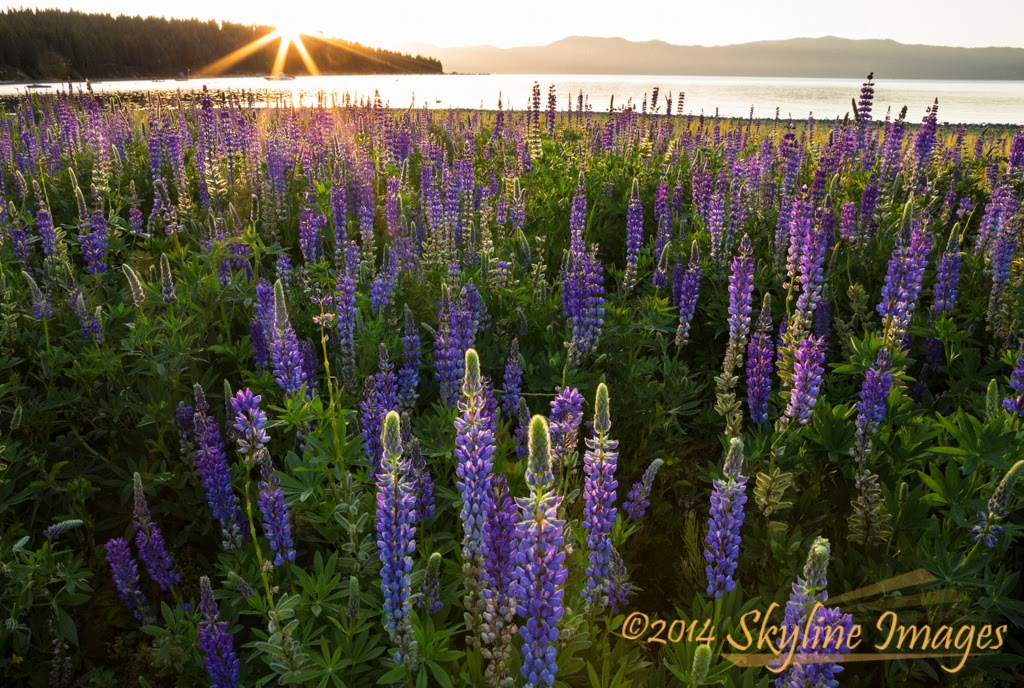 Lake Tahoe.  Backlighted lupines at sunrise.  I’ll just say that I had a hard time getting my mojo on during the beginning of this trip.  This is the morning I found it, standing in the tall flowers and enjoying the light. 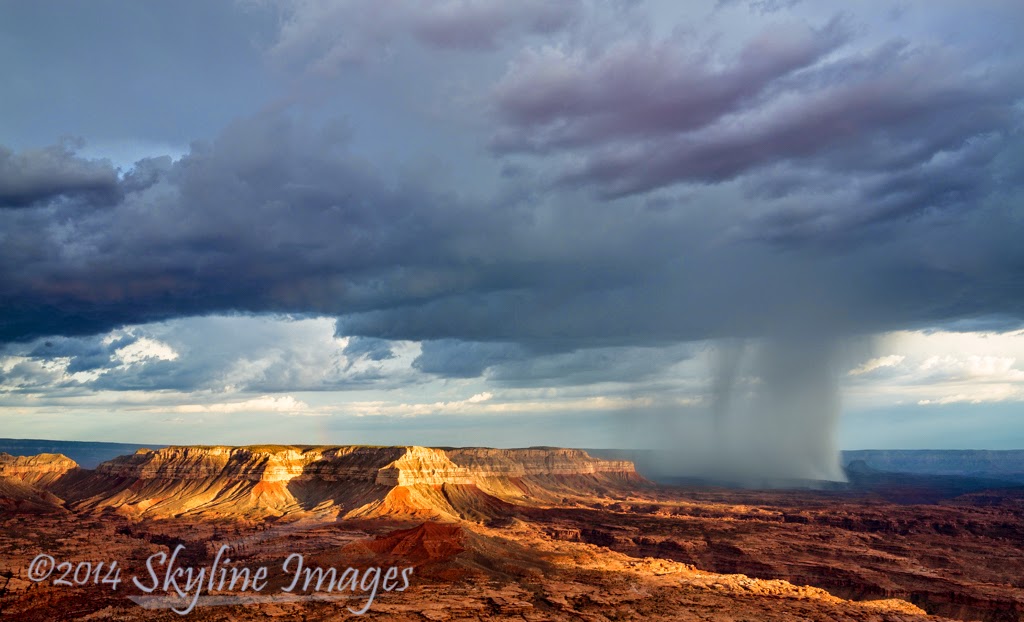 This trip marked the beginning of my fascination with the North Rim Grand Canyon Backcountry.  We had a spectacular monsoon season this year, and I love the way the sun broke out, just before setting, during this squall over the canyon.  I took this from the tip of Jumpup Point, a gorgeous place which requires an investment of time and tire tread to reach. 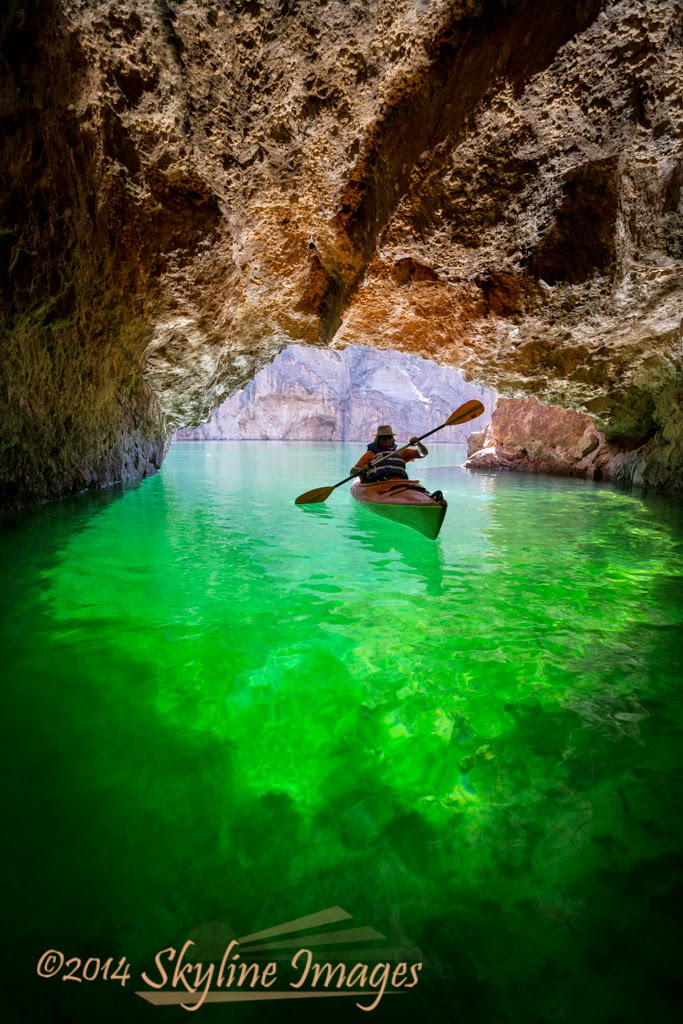 I ripped off this concept from Kerrick James, who was kind enough to share it with three of us during an epic day paddling the Colorado River below Hoover Dam.  I believe he coined the name “Emerald Cave.” This day is one of those lifelong memories. 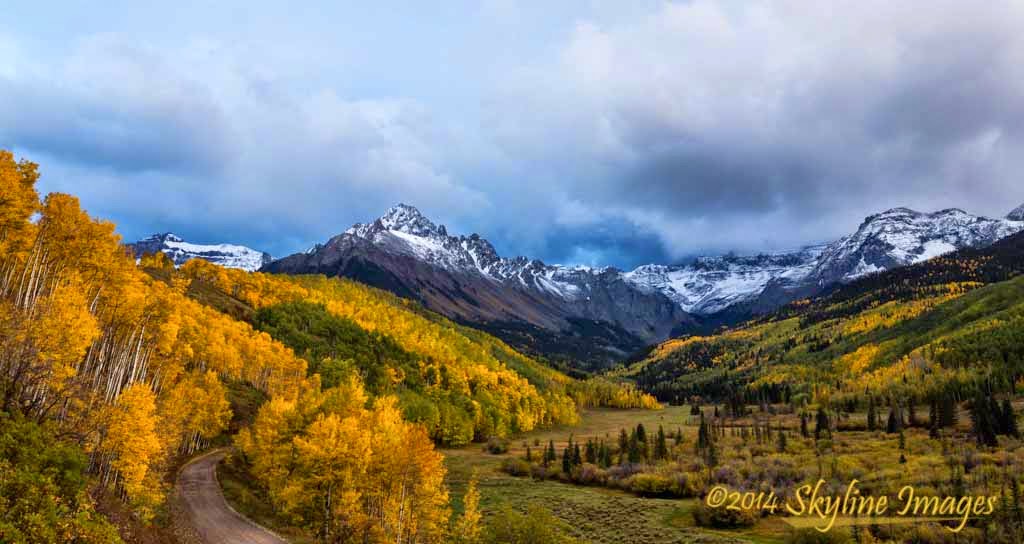 My first autumn in Colorado, I was thrilled to be there for the season’s first snow.  I have never been the most graceful in any group, and managed to decorate myself with mud climbing to this vantage point (thanks, Jerry Dodrill).  Grand, flamboyant, cold.  What an afternoon. 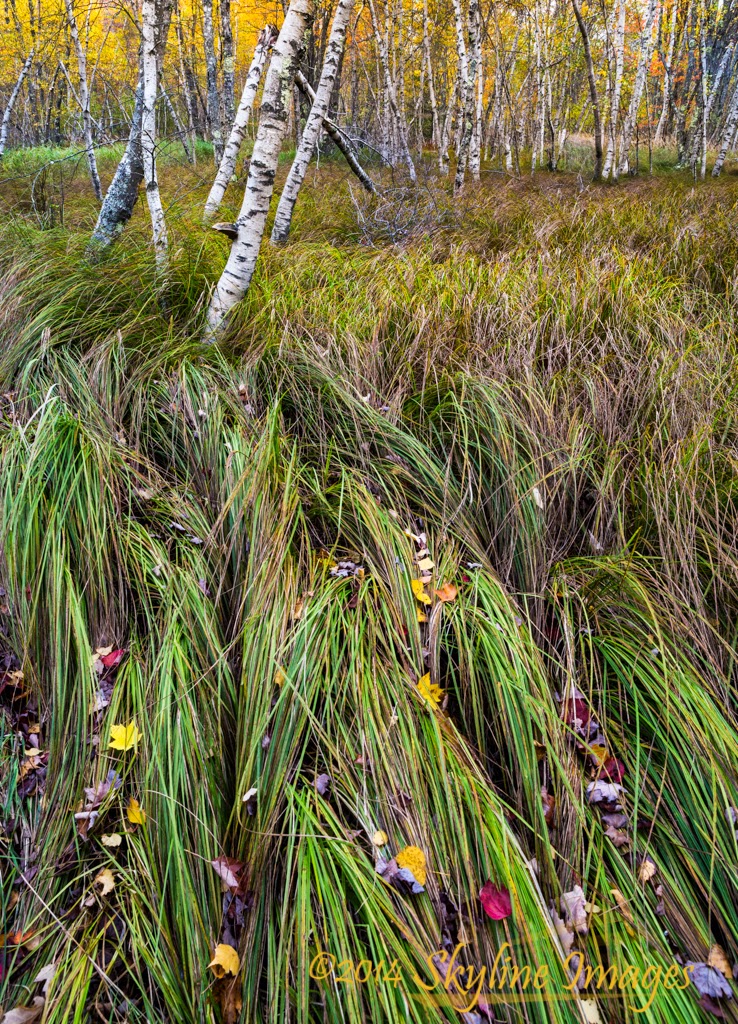 Acadia.  Again.  This was another tough choice, but it conveys to me the feel of so many intimate vistas in this incredible park which has a bit of almost everything photographically.  I must be hooked, because I’m going back in winter.

Havasupai.  I began to think I was the last Arizona photographer who had not been to this idyllic Grand Canyon tributary.  The turquoise is real.  The falls are real.  The hike (no cars) is no illusion either.  I so loved the foreground cascades with cottonwood leaves pasted under them that this image was a hands-down winner.  I’d love to go again, but perhaps by helicopter. 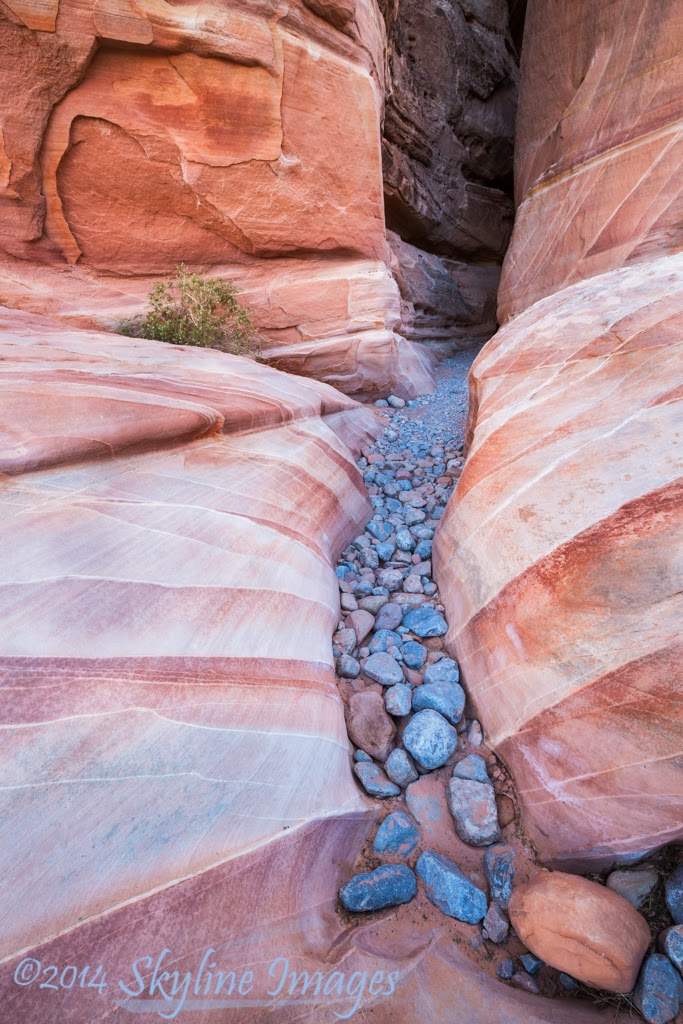 The holiday road trip has become a delightful tradition.  A week on the road with my husband and dog is a joy, and I have the honor of choosing the photogenic locations.  Valley of Fire (Nevada) State Park is a wonderland of rocks.  It can be crowded, but early mornings and off the road one can still find solitude.  I’ve just scratched the surface of this place.

I appreciate your interest and support through 2014 and hope to continue to connect with you next year.
Posted by Rebecca at 11:30 AM No comments:


I'm getting rather hooked on this viewpoint thing.  You may have read my post about a week traveling unpaved roads to some more remote areas of the North Rim of the Grand Canyon in July.

There's little better (nor more rare) than solitude at the Canyon, but there is some work involved.  The unpaved roads seduce you into a false calm with their initial smoothness, and then progressively deteriorate into 2 MPH gems paved with carnivorous limestone.


I’m not complaining mind you; that’s where the good tires come in.  While outfitting the Four Wheel Camper, my husband educated me on E- rated tires.  Now I’m eternally grateful.  Even these tough guys are getting a little torn up, but without them I’d have been unhappily changing tires in some unpleasant locations.

I have a bad history with tires, too.  Remember the magical delaminating Firestones? A set flipped my Explorer in 1999.  Since then I’m pleased to fork out the cash for good tires.


In October we made the trip out to Toroweap.  This place is more heavily travelled than most of the others and has “amenities;” a campground with composting toilets.  The 61-mile drive is legendary, but true to form, the first 50 are a cakewalk.  The appeal of the place, I think, is that there’s a 3000 foot drop to the bottom of the canyon, and a rather straight stretch of river to the east.  It’s been much-photographed but I enjoyed my first trip there very much.

Just a few days ago I made it to Buck Farm Overlook, only 28 miles off pavement but much more isolated.  I didn’t see a soul.  A photographer friend told me “good luck with the sky.  I don’t think you’ll have any clouds at all.”  Well.  I had about 3 minutes to shoot before a legendary inversion moved in and cut off views beyond my toes.  I’ll have to go back, of course, because I didn’t see the canyon again from that spot.

The dog and I spent a night at the South Rim on the way home and I was much better able to take advantage of the foggy conditions there.  That morning it was 26F.  Is there such a thing as freezing fog?

You can guess what the hot chocolate is for.

Images from this trip are in the Grand Canyon Gallery on the website.
Posted by Rebecca at 6:10 AM No comments:


I’m really a morning person.  Really.  Sometimes, though, it’s not too easy to get out of bed.  There’s a long distance between where my feet rest in bed and where they hit the floor.  The longest.  Once I’m upright, though, I’ve literally never had any regrets about early awakenings.

I mused about this a bit in my guest post on CMSPhotography’s “You Can Sleep When You’re Dead” blog and had a comment in the same vein.  This all got me thinking of all the treasured images that never would have been if I’d hit the snooze button, so here I am writing about it.

Nope, you won’t catch me quoting the obvious self-righteous aphorisms about the virtues of early rising.  To each her own.  I’m sure there’s magic to be had at 1:00AM, but other than the odd eclipse, I’ll be missing that.
So here are a few morning images and their stories, friends.


This was my first trip to Death Valley, before the truck camper, so my husband and I had dragged ourselves out of bed at the Lodge and into the dark to the spot among the salt polygons that I’d scouted the day before.  Found near the lowest point in the United States, the beautiful geometric patterns result from repeated evaporation cycles.  At an average of 1.9 inches of rainfall per year, they were slow to form indeed.  This particular Christmas Eve, there wasn’t a cloud to be seen, so I whipped out a rented fisheye lens and interpreted the flats and rising sun on the Panamint Mountains in an unusual way.  I call this one Planet Salt.

Sunrise comes early in the Owens Valley in late April.  My friends and I were hoping for spectacular light on the Sierra Nevada Mountains at sunrise, but as we were standing in the reeds at the banks of the Owens River, we realized that the setting moon was going to hunker down into a cleft in the crags.  I changed lenses and jogged along to my left a bit and ended up with this.  I’m fond of the image, and Shutterbug Magazine used it as a Facebook Cover Photo for a few weeks.

I’m always looking for good vantage points on downtown Phoenix.  This one presented itself as I was cruising Google Earth; the roof of the terminal four parking garage at the airport.  It was a simple matter to find the morning that the full moon set at the right angle for this image. I figured that the worst case scenario would be a visit from airport security.  I got all set up in the corner right in front of a security camera and waved at it.  I suppose I didn’t look too dangerous, because there were no visitors.  I was pleased that aircraft were landing from the west so that this one could balance the composition for me.  The $5 for parking was a bargain indeed.

I’d been running around with a small group KerrickJames workshop last August.  We’d had a lot of fun, but also had some trouble.  One morning in particular we hiked in the rain, hoping the storm would break, only to come out of the trees to the storm’s first lightning strikes, uncomfortably close.  We turned right around and slogged through the mud back to the vehicles.  I believe the proper technical description is that we were “skunked.”  Later in the week, this morning at Monument Valley wasn’t looking too good either, and I was sorely tempted to sleep in.  But what if my friends got something good that I missed?  We met our Navajo Guide and headed out.  Looking at the sky, we thought we’d wasted another morning.  We shot in the dull light and ultimately ended up with just a minute or so to shoot the color, texture, and clouds.  It was long enough.  This morning felt like karma.

Thanks for the visit.  Maybe I’ll see you out there one morning.

More images, from all hours of the day, are at skylineimages.net.
Posted by Rebecca at 3:08 PM No comments: