I’ll just get this out of the way first; I’m kind of a chicken.

People often comment that I’m very brave (or stupid, perhaps) to be camping alone, or to tackle dirt roads, sometimes of questionable quality.  Well, I love those trips, but I’m not brave.  I have a chat with myself pretty much every time I pull out of the driveway in the camper – four-wheel drive pickup combo I call Lurch, talking myself into the proper adventure-seeking mindset.  I’m grateful that so far I’ve been successful with the attitude adjustment and that I’ve had no frightening experiences in 100 nights of camping.

100 nights, almost half of them alone and most outside established campgrounds.

This camper has changed my life and way of working photographically.  I’m grateful.  Here are a few superlatives from that first 100,  just for fun.

Most isolated;
Night 39, Jumpup Point on the Grand Canyon’s North Rim.  Toroweap is a longer drive, but I’m sure there were no humans for many miles in any direction at Jumpup.  I love that, and we had a spectacular monsoon storm too.

Most crowded;
This was a tough one, because I’m almost obsessive about camping in places and at times which minimize crowds.  Then I remembered the Overland Expo at Lake Mary near Flagstaff May 2014, nights 32-34.  This is a cool convention with classes on topics as far-ranging as marital harmony on the road, cooking, and recovery techniques in deep sand.  We accepted an invitation to camp in the area reserved by the maker of our mobile mansion, Four Wheel Campers.  The camaraderie was fun, but after three nights cheek-to-jowl with maybe 40 people, my husband, the dog and I were pleased and relieved to spend the last night in the forest alone.  Incidentally we decided not to attend in 2015 and learned later that the area was a giant mud bog.  Lucky break. 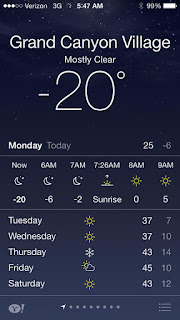 Coldest;
Night 51, a little over 2 years ago, I woke up to -20 Degrees F at Grand Canyon’s South Rim.  There were two other parties in the campground, in tents!  I managed fine with my propane heater and stood on the canyon rim uncomfortably, waiting for the sun.

Most Involuntary:
This story has been told, but in summary an electrical problem with the truck stranded me on the first of a 6-day trip (night 26) in Death Valley.  I limped the vehicle to Stovepipe Wells Campground and spent a less-than-stimulating day waiting for help.  I did shoot the dunes the next morning before the long tow to Las Vegas. 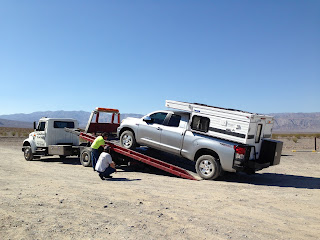 Worst weather/least attractive;
Yep.  One place gets both descriptors.  We met friends (who were in a sort of hotel) in Tecopa, California.  We barbecued together at a strange desolate campground and boon docked there on night 55.  The wind was legendary.  We ended up pulling down the pop-up roof (not so easy with the wind ripping it out of our hands) and spending the rest of the night on the dinette bed, which is a little small for two.  Tough night.

Most visited;
Valley of Fire State Park in Nevada.  Nights 99 and 100 were there, for a total of seven nights.  VOF is a spectacular small park.  There’s no question that my work gets better as I become familiar with a place, and this one will certainly continue to be worth the 5 ½ hour drive for some time.

Closest to home;
Night 10 at White Tanks Regional Park (Maricopa County AZ).  I had the itch and took the dog out for some quality time camping and hiking in my own backyard.  As I write this, I’m thinking that more of these little trips in the desert would be good.  Just not in the summer.

Furthest away;
Our very first night with Lurch, at a horse staging area off hwy 20 near Nevada City in Northern California.  We’d spent the day in Reno having the camper installed, buying a few essentials and filling the water tank at Home Depot, Trader Joes, etc.  It was too late for any of my grandiose camping plans, and we found this (most likely illegal) spot on Google Earth.  It was lovely.  As for the distance issue, I know that’s not really very far from home and I’m hatching a plan to remedy that problem.

There’s one obvious question I haven’t answered.  So many spectacular camping spots, from lonely nests in Death Valley to a field of sunflowers near Flagstaff to a handful of awe-inspiring views at the Grand Canyon.  I just can’t choose a favorite.  Sorry; I tried.  Perhaps the best is yet to come, provided I can keep my courage up.

Meanwhile, I’ll leave you with these words from John O’Donohue;

“May the angel of the Imagination enable you
To stand on the true thresholds
At ease with your ambivalence
And drawn in new directions
Through the glow of your contradictions.”
Posted by Rebecca Wilks at 2:39 PM No comments: