Well, it's time again for the annual exercise of counting my blessings in this photographic way.  I hope you enjoy the images. 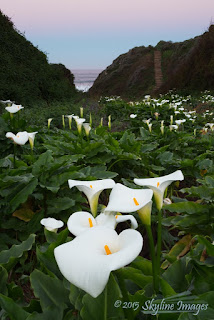 January
This driving trip, a workshop with Southwest Perspectives, was a fabulous week-long marathon from Avila Beach to Monterey. I knew my favorite from January would be from this trip, but had a hard time deciding which image.  I just printed this one for a client and that made the decision for me.  Last winter was warm in California, and the calla lilies bloomed early.  Lucky for us; we didn’t expect to see them in January.  In the end, this one was worth slogging through the mud and darting around to get out of each others way.  I love the earth shadow over the ocean and the near-far perspective. 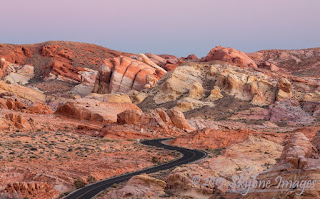 February
Valley of Fire State Park (Nevada) is an extraordinary place.  It is rather close to Las Vegas, though, so I find it most inspiring in the early mornings before the crowds build.  I love the way this image gives a feel for the landscape there and (again) the predawn earth shadow. 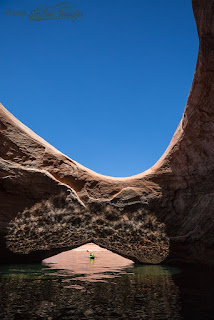 March
Lake Powell has appeared regularly in this year-end blog; I just can’t seem to stay away.  Part of the reason I keep returning is that the landscape changes dramatically with water levels.  This open-roofed cave in Rock Creek Bay was large enough to drive a houseboat into the year before.  I much prefer the kayak-only entrance this year.  That’s my friend Barb modeling for me.  This image won me a free “America the Beautiful” Pass for federal Lands, too.  Many thanks to Gary Ladd and Danny Woods, the Powell experts, for their guidance. 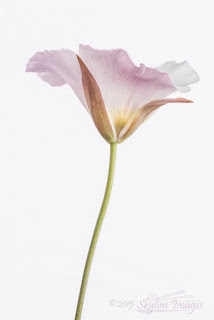 April
This one is a little bit of a departure for me.  It looks like a studio shot, but this Sego Lily was shot with a diffuser (sort of a glorified white bedsheet on a frame) behind the flower and the sun behind it.  The plant was alive in the Mazatzal Wilderness before and (perhaps more importantly) after the shot.  Part of the challenge of photographing details in nature is finding just the right specimen, and this one continues to impress me.  The image also reminds me of a great day running around with Colleen Miniuk –Sperry, Paul Gill, and Jeff Maltzman. 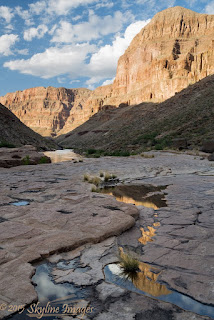 May
The bottom of the Grand Canyon.  Another frequent flier in my annual top twelve.  This was the last afternoon of a ten-day trip. Pumpkin Springs, river mile 213 of 226.  I’ve done Grand Canyon river trips 3 of the last 4 years and remember standing there thinking it’s likely to be quite a while before I get down to this spiritual place again; a bittersweet thought.  At any rate, the s-curve and reflection captured my imagination.  It still does. 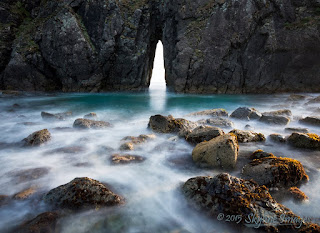 June
As it turns out, my favorite image (another tough choice) from a Northern California Redwoods trip was not taken in California and included no redwoods.  This is Harris Beach in Southern Oregon.  The dreamy quality results from the 25-second exposure.  It belies the rough seas which got me a little wet and soaked my companion. 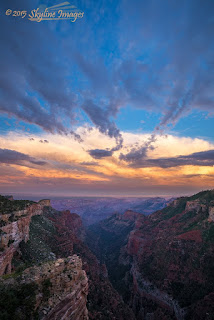 July
The North Rim of the Grand Canyon has become a favorite.  Thinking back, my first visit was 25 years ago and I’m more connected with the place each year.  For about 18 months I’ve been going every chance I get, and spending most of my time in the forest and at remote viewpoints.  I’d be hard pressed to name a favorite.  This spot is the Saddle Mountain Trailhead and it is certainly in the top 5.  I’ve weathered several storms here.  On this day the storm was kind enough to clear at sunset.  We’re looking down an upper drainage of Nankoweap Canyon and can just make out the confluence of the Little Colorado River in the distance.  If the world ends, you might find me here. 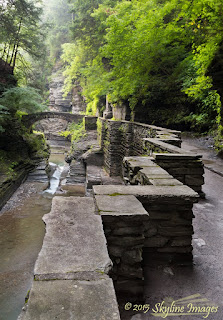 July
Did you notice that?  No, I couldn’t choose.  My Nephew got married in central New York in July and I did a little exploring (again while everyone else was asleep.)  This is Treman State Park, a gorgeous place complete with depression era (CCC) stonework.  The last time I was in the neighborhood in the fall, the canyon had washed out and was closed.  I hope try for fall color there in 2016. 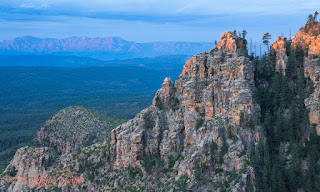 August
The Arizona Highways stock calls pointed me toward the Mogollon Rim (among other places) this summer.  I’d been working on a couple of trails that will be hikes of the month and came out to this favorite spot to camp.  Not a bad view, right?  This early dawn light has a soft subtlety that appeals to me. 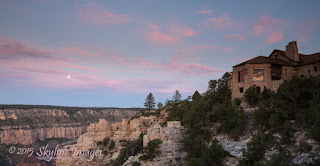 September
A much more pedestrian view of Grand Canyon’s North Rim.  This was taken the morning after the Supermoon Eclipse.  I was all set up at Point Imperial to capture that the night before and got nothing too exciting because of clouds and haze.  This is the setting supermoon just before sunrise.  My favorite thing here is the reflection of the color in the eastern sky in the lodge window.  I was standing there with a woman in her 70s from Minnesota.  She was traveling alone and had never seen the Grand Canyon before.  We stood there for the better part of an hour, unusual for most visitors but not so much for photographers. I loved seeing this now familiar place through her eyes and appreciating it in a new way. 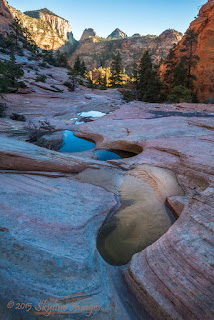 October
After a terrific Zion National Park workshop with Charlie Cramer and Jerry Dodrill, I stayed one more afternoon and revisited this place in better light.  I do love those s-curves, and this image conveys the ruggedness of Zion and the persistent influence of water in shaping the landscape. 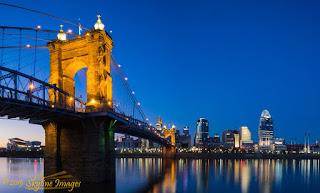 November
It was a tough month photographically. Other obligations seemed to eat up my time, and I didn’t take any road trips at all.  This image of the Cincinnati skyline taken from across the Ohio River is really the only shot I love from November.  It’ll do. 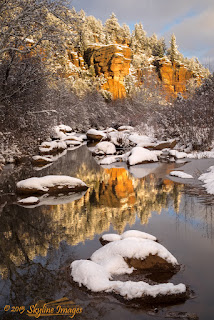 December
I had the great honor of speaking to the Rim Country Camera Club (RC3) in Payson, two hours drive and up a hill from my home in the desert, about my North Rim Grand Canyon Project.  To my delight, it snowed.  My generous friend Greg put me up for the night and we swung by the East Verde River in the morning.  I suspect he really wanted to look for eagles in another spot, but I'm quite grateful for the hour or so we spent tromping around here.

Thanks for stopping by to look and for your support throughout the year.  I hope natural beauty inspires you as it does me.
Posted by Rebecca Wilks at 6:02 AM 5 comments:


We were just finishing up dinner when the winds began in earnest.  My husband is too polite for an I told you so, but he did.  The clouds were coming in, and parking the camper on this knoll with a view was asking for it.  So we packed up.  We'd scouted a spot tucked back in the Alabama Hills' famous boulders for just such an occasion.  It was lovely, right down to the owl which sang to us after the light snowstorm cleared.  And we were well sheltered.  We've passed a few long nights with high winds.  I don't like wind under any circumstances but in the camper there's no sleep to be had at such times.

So, this is our (apparently annual) winter solstice road trip.

We used to volunteer at an event called Miracle in the Desert for homeless families which occupied us Christmas Eve and Day.  The local Rock Bottom Restaurants stopped sponsoring the event four or five years ago, so we started a road trip tradition.

The solstice, like Winter in Chinese Medicine, is about renewal, planning and preparing.

“In the midst of winter, I found there was, within me, an invincible summer - Albert Camus

The long winter nights camping are ideal for brainstorming, reading, and visualizing how I’d like to coming spring’s rebirth to be.

This year, we began at Devil's Fire (AKA Little Finland or Hobgoblin’s Playground).  I'd been there 18 months or so ago but Marco had not.  The rocks here are delicately beautiful, and BLM seems to avoid signage or other help in finding the place for that reason.  Sadly, two of my favorite formations had been destroyed in the interim.  It’s still a delightful place.  The weather was overcast as it had been during my first visit, but there were still photos to be made.

There were three nights in Death Valley.  Every time I leave this huge diverse park, I make notes about what to do next time.  The list is longer with each trip.  I loved light painting at the charcoal kilns at nearly 8000 feet elevation.  This project was much easier with an assistant shining the light on my cue.  The moon rising over the ridge really made the shot.

The dunes were magical as always.  Well, perhaps more so.  The skies were full of lovely clouds and there was a rainbow.  I'm tempted to say that watching the dog run and play was better than the photography, but it’s tough to beat a rainbow.

The wind really kicked up on the last night in the Mojave Preserve.  We met friends with a bigger rig than ours and, I confess, we used them as a wind break.  Any port in a storm.  At 36 degrees with gusts to 50 there were no sunset shots that night.  I did gear up and walk for 30 minutes or so, but not with great joy.  We’re grateful for the Spaghetti with meat sauce and homemade fruit cake they served us and for RV heaters.  The next day dawned joyfully clear and still.

“The black moment is the moment when the real message of transformation is going to come.  At the darkest moment comes the light.” ~ Joseph Campbell

Posted by Rebecca Wilks at 6:21 PM No comments: