What is subtle light, anyway?

We all know what the converse is; the blatant, brazen images.  Sometimes those are pumped-up photographs with little connection to reality which we love to hate.  Other times, they might be misunderstood by those who are unfamiliar with the landscape depicted.  The poppy image was featured on Outdoor Photographer Magazine’s Facebook page as photo of the day.  One viewer commented only “too much Photoshop,” which I took to mean that the color seemed unbelievable.  In fact, this image had only sharpening and spot removal applied to it.   This is, in fact, what it looked like.

The commenter was from the Northeast United States.  I’ve heard such comments from folks up there before, mostly in reference to the mind-boggling color of southwest sunsets on red rock.  They just don’t have that there.  Likewise, my southwest desert-based mind has to reset itself when I visit Central New York in the summer.  Everything is bright green.  Our brains are not able to process what they are not accustomed to seeing.

One more example comes from an invitation I received from our local office of the American Lung Association to help promote Lung Force, a campaign which uses the color turquoise to draw attention to lung cancer in women.  The local ALA people thought this image of Havasu Falls would tie the color campaign to our local landscape.  I was very excited to contribute to this effort.  Then I got a call; “National” didn’t want to use the image because it looked fake.

I've been giving this some thought since the Moab Photo Symposium last April.  Open-hearted Bruce Hucko tossed an off-handed complement my way, saying that he thought I was good at portraying “subtle light.”  I hope that’s true; I certainly do appreciate delicate light, though I’m hard-pressed to offer a sturdy definition.  Instead, a couple of recent examples. 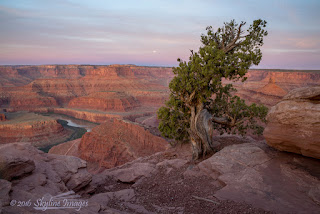 From Dead Horse Point State Park (UT), a subtle sunrise.  Sometime we photographers are frustrated when clouds on the eastern skyline diffuse the first light.  I love the pastel character here, though, and the fact that the quiet colors don’t overwhelm the setting moon that rewards the viewer who lingers over this one. 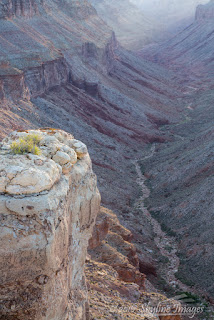 Marble Canyon area, the eastern portion of Grand Canyon National Park.  This one illustrates the magic of diffused (by cloud cover) backlight.  The canyon is as breathtaking in quiet times as in the brazen.

There’s more than one kind of drama.
Posted by Rebecca Wilks at 7:03 AM 3 comments:

It’s hard to fathom that 20 years have passed since my first summer volunteering at Camp Not-A-Wheeze, a week-long Arizona camp for kids with asthma held at Friendly Pines Camp in Prescott AZ.  I’ve done a variety of jobs there from living in cabins with kids to staffing the infirmary and have served on the Planning Committee.  Of course I’ve always taken pictures, but this year that was my defined job.

I have a few thoughts about that.

It was a bit odd at first not to be involved with the medical aspects of camp this year.  I did pitch in here and there but mostly I photographed.

I’m much better at photography than at herding cats, which is a large part of serving as medical staff in the cabins.  Some years were delightful and some not so much, but I suspect that medical volunteers with kids of their own might be better at the crowd control portion of the job than I.

As I’ve observed before, there are aspects of photographing events involving kids at camp that resemble wildlife photography.  My friend Greg McKelvey blogged eloquently about this recently and I, too, learned a great deal about wildlife photography from our mentor, Bruce Taubert.  Kids move quickly and are unpredictable.  Kids, like wildlife, make better models when they forget you’re there with a camera.  Lots of technical considerations learned from photographing grizzly bears can be applied to this setting.

Finally, this experience at camp was a stellar example of the advantage of being familiar with what I’m photographing.  I know people and schedules well.  I know when the light will be good at the rock climbing wall and know folks who will clue me in when something is happening in the infirmary.  I was excited to photograph things that no one really had before; medication time in the cabins, Flag raising, and the ceremony held on the last night of Camp.  This kind of familiarity is important in landscape photography as well, but things move much more quickly at camp.  If not for 20 years of experience, I would have missed a lot.

And sometimes, I even run into actual wildlife out there.

Posted by Rebecca Wilks at 8:58 AM No comments: