This was our little girl’s second real camping trip, and she’s already teaching us how it should be done. 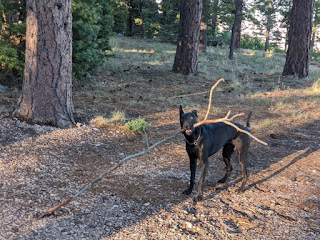 There’s always something to play with.  Generally, that’s sticks.  Well, OK, it’s pretty much always sticks when we’re on the road.

Be careful.  She’s learned to move away from the cliff edge when one of us says, “be careful,” but we were gobsmacked when she warned me that I was getting too close.  It was just a single bark.  Bossy Girl.

Be aware of your surroundings.  I’m always first out in the morning.  She’s reasonably patient waiting for my husband to get dressed and let her out, but then she’s right on my scent trail.  She’s rather good at finding me.
Communicate.  It took us a while to realize that the ants were biting her paws at one campsite.  She was acting odd, but we didn’t get it until, when we opened the camper door, she sailed up inside, sending ants flying in all directions.  Humans can be rather slow. 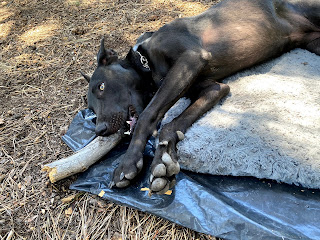 Nap.  We already knew that one.

Yes, I do know how tiresome new parents can be with their endless baby pictures.  Thanks for bearing with me.