I Eat My (Sarcastic) Words


For over eight years we've been running around in the Toyota Tundra-Four Wheel Camper combination we’ve come to call “Lurch,” laughing at other 4WCs with the bumper sticker, “#onelesssprinter."  Sprinter vans seemed so popular with the bearded hoards that they were almost trite.

And then we bought one.  Marco is busy (very busy) doing its interior build-out , getting ready for a December trip and I’m on what I’m sure will be my last trip in Lurch.  I’m just hanging out with my camera in a little desert campground a little more than an hour from home; I thought we needed some quality time before he goes on the market.

The anthropomorphism is, I have concluded, a bit of a problem. Perhaps I can be forgiven if I imagined “him” protecting me in dicey situations, especially on solo trips.  I’ll admit to being unnaturally attached. I need to let go, though.

Lurch has been great, albeit with a few little kinks we eventually ironed out.  We’re looking forward to much more camping, but would like to set ourselves up with a vehicle which is more conducive to the oldsters which I hope we’ll have a chance to become.  Eventually, pushing up the pop-up roof and maybe even climbing up into bed could become difficult.  Also, we want a bit more storage and more space for Gypsy the wonder dog.  She’s claimed the vehicle already, though it’s still under construction.

So, this is mostly a farewell post to an old friend, hoping “it” (see what I did there?) finds a loving home.  I have a few memories to share.

Wind.  I love the Mojave Desert, but it can be fiercely, tear the roof off (not literally, but close), nowhere to hide, suck your belongings out the door (literally) windy. I don’t have many unpleasant memories in 349 camping nights.  These are them.

I’ve had a total of two flat tires, both of which happened in places where I could get help. Once we were across the road from the only place to get a repair in 100 miles.  I feel blessed.  Of course I still need to get home from this last trip without disaster.

I took a particularly stupid wrong turn once, in the North Rim Forest.  My friend was behind me on this nasty road in her Jeep Wrangler (no danger there), so nervous for me that she was afraid to say anything on the walkie. We both knew I could neither back up or turn around, so we wished for the best and got it. I dodged that bullet.

Regular readers (all twelve of you) will remember the pack rat this year.  I won’t reiterate the story, but feel free to follow the link.

There were some unconventional locations; driveways loaned to me by generous rangers and friends (I generally ran an extension cord into the garage), “beer camp” in the forest next to Barnstar Brewing Co in Skull Valley (that was fun), and the occasional not-quite-legal spot.  I always had some story prepared about doing night photography, which may or may not have been true, and catching nap until the moon went down. 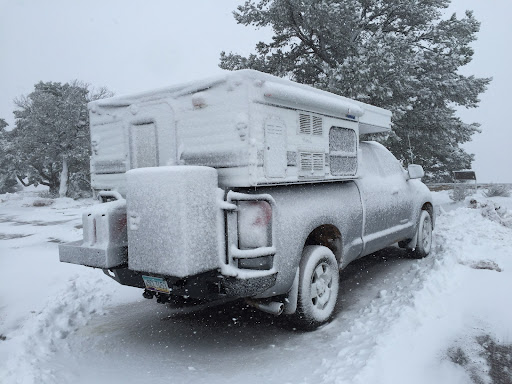 And then there's winter at the South Rim.

One night at Lake Pleasant feral burros commenced bashing against the sides of the truck at 2:00 AM.  I still haven’t figured out why, but I yelled pretty loud and that seemed to work.

There's been just one celebrity sighting.  I was waiting for a couple to leave one of the four undeveloped (first come first served) sites at Organ Pipe National Monument when somebody let us know that I was hovering over Craig Childs.  Nice guy; he helped me sort out the provenance of a pot sherd I found in the Marble Canyon area later.

There are so many memories, from places I visit repeatedly like Grand Canyon’s North Rim, secret and not-so-secret dunes in the Mojave, Lee Flat (Death Valley) in the snow, The Kofa Mountains, and old and new local favorites like Watson Lake and the Harquahala Mountains.

And, if you know anyone in the market for a well cared-for 4WC…

As many of you know, I love to camp and photograph by myself. There’s news on that front but that’s a topic for another post.

Group photography trips also have their place, though. This last one was a Smoky Mountain workshop put together by Colleen Miniuk. It was a great introduction to the Smoky Mountains, a chance to be inspired by the work of others, and a friendly learning environment. There’s always something to learn.

The highlight of these trips, really, is the tribe. These are the kind of friends who, after a long absence, can pick up together as if no time has passed. I missed them, especially since the same trip was cancelled last year. We did this, joyfully, together.

I’m lucky to count lots of special people as part of my tribe. I love the impractical dream of having all my best photo buds together on one trip. Anything is possible, but for now I’m basking in the glow of this lovely subgroup.

So, it rained. There was a whole lot of damp, cold, and unspectacular (we can call it “subtle” instead) light. Fog worked for us sometimes and overcast made for good shooting well into the morning without harsh contrast. Good gear makes the wet weather bearable, at least, but it was pretty wet.

When the sun grudgingly showed up, I appreciated it that much more. A couple of times the setting or rising sun would peek out through a gap in the horizon and astound us, albeit for no more than a minute.

Great Smoky Mountains National Park is the most visited of US National Parks, with over 12 million visitors in 2020, more than four times the number at the Grand Canyon and more than three times the second-place park, Yellowstone. This translates into traffic on the roads and trails as well as visitor centers. We often found ourselves driving scenic loops locked in at under 10 MPH and photographing spectacular, apparently peaceful scenes while dodging other humans and breathing diesel fumes and cigarette smoke. I get it; autumn is an exceptional time in this beautiful place. No regrets.

Being in a place so different from the desert southwest, where I live, is great for conditioning my creative mind. There’s water everywhere and SO MANY TREES. Yes, that’s largely what we were there for, but if I’m honest I’ll admit that they sometimes get in the way. There are so many trees that Park allows building campfires with downed wood. We don’t do that where I’m from, ever.

The group dispersed after four days, and my friend Amy and I settled into a rental in Townsend TN and a quieter time. We did some return trips to places we’d already been, explored, and chased waterfalls and cascades from a sweet little book we picked up in the visitor’s center (after waiting in line to get in.)

Autumn, a new place, and to be reunited with the tribe were all such gifts, and well worth my first airplane trip since early 2020.

More images are in the Autumn 2021 gallery on the website.

Posted by Rebecca Wilks at 7:43 AM No comments: