“I cannot endure to waste anything so precious as autumnal sunshine by staying in the house. So I have spent almost all the daylight hours in the open air.” ~Nathaniel Hawthorne

Wow.  What a fall!  First the aspens at peak color onthe Kaibab Plateau, then Maine and New York, and now the eclectic leaf litter of the Sierra Ancha Mountains in Arizona.

Words are difficult, and I fear that I don’t have the literary skill to bring the experience to you without crossing into the ridiculous.
“There is a perennial temptation to plunge into a purple sea of adjectives about October.” ~Hal Borland
I do, however, have images.

This place has surprised me before, and I have a soft spot for it because my first image published in an Arizona Highways calendar was taken here.  Add to that the dearth of people, perennial stream, and astonishing carpet of leaves decorating the remarkable geology, and it’s no wonder that I keep coming back.

The Sierra Anchas are intriguing in other seasons but just blow me away in the fall.  Workman Creek and Reynolds Creek are my favorites so far, though I can’t help but think that there are undiscovered treasures in other canyons.

More images from this trip are toward the end of the Autumn 2013 Gallery on the website.
Posted by Rebecca at 6:28 AM No comments:

Well, OK, not exactly.  This place has been calling to me for years, so I signed up for a trip with Colleen Miniuk-Sperry, three-time artist in residence at the park.  Her photographic work is fabulous, and she knows the park particularly well.


Some of you may have heard that the National Parks took a little hiatus, right in the middle of the fall color season.  Though people were certainly sneaking in (we heard about two rescues on Cadillac Mountain during the closure), we really didn't have that option traveling with a commercial group.


It turns out that the beauty doesn't stop at the park boundaries.  We spent time in public gardens, parts of the famous carriage road system which lie outside the park, state parks, and other creative locations.
Colleen and the volunteers with Arizona Highways Photo Workshops did a yeoman's job re-imagining the trip, calling it "Autumn AROUND Acadia."  Still, many of us are itching to come back and see the park.  Maybe next Fall.


There are some great memories.  Two of us broke off and speed-walked to the only cobblestone bridge on the island, feeling like reality show contestants with 35 minutes to shoot before we needed to take the 30-minute walk back.  Watching the light come up at Cooksey Drive overlook, a typical rocky Maine Coast spot,  and gasping at the pink-orange light.  We just had time to capture  the spectacular sky and backlight on the shore cobbles of Bar Harbor before the giant cruise ship slipped in (to the strains of the Darth Vader theme in my head.  Can you hear it?)


Of course there was lobster bisque, lobster rolls, lobster salad and (wait for it) lobster ice cream.  Yes, I tried it.  Enough said.

I stayed on a while and visited my brother at his Ithaca home, in the Finger Lakes region of New York. Though he's been there for over 25 years, my camera and I have never had the pleasure of a trip in autumn.  The Devonian Shale  gorges are truly an inspiration.  Buttermilk Creek and Watkins Glen are especially breathtaking in any season, but even more so  with the trees turning and the leaves emphasizing the geologic lines in the gorges.

More New York and New England images from this trip are on the website.
Posted by Rebecca at 3:51 PM No comments: 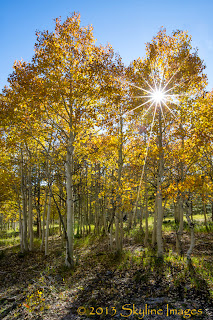 Years ago, when I first met the Master Landscape Photographer Jack Dykinga, he said something which stayed with me. Since then I’ve had an opportunity to spend some time with and learn from Jack, and as it turns out, he doesn’t remember saying it. Go figure.

Whether he said it or not, I find it interesting; ‘Landscape photography is essentially a solitary pursuit.’

I agree, much as I enjoy my photography outings which are social. Company is fun and even educational, but working alone is more productive and creative for me.  There’s also the freedom from worrying about other people in my shot during busy workshops and from accommodating the eating and sleeping schedules of others.

As a side note to the many wonderful photo friends I’ve gone out shooting with; I have no regrets, I love you, and I’ll just say this is a matter of balance. 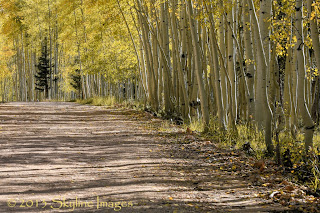 So, I set out last week to photograph the vibrant yellow aspens in the Kaibab National Forest, near the North Rim of the Grand Canyon, in the camper.  Alone.  I put on 200 miles after I got to the National Forest, scouting and chasing light on the forest roads.

After a few days of essentially talking to no one, I surfaced for gas, a hot breakfast and a little conversation.  I found connectivity (in the GCNP Campground Store) to tell my husband I was still alive. Then I went back to the forest.

My mind quieted as I walked among the indescribably magical yellow and orange aspens.  I listened to the coyotes yipping as they hunted together at dusk.  I startled a group of mule deer (who in turn startled me) when I opened the camper door before dawn.

I even made one image of the Grand Canyon.  What the heck; as long as I was there…

More images from this trip are in the Autumn 2013 gallery on the website.
Posted by Rebecca at 6:26 AM No comments: