I know many of you came to this blog because of the Yarnell Hill Fire posts, but I'm sorry to say that this is most likely the last of those.

You see, it's been a year. As many who have negotiated a big loss know, anniversaries (especially the first) are important and challenging.  We commemorated the anniversary yesterday with some heartfelt thoughts and some ceremony.

I can't quite fathom how our community has changed since June 30, 2013.  The greatest loss, of course, is the deaths of 19 members of the Granite Mountain Hotshot Crew.  I suspect that, immersed in the business of fundraising, care-taking for humans and animals, cleaning, building, directing volunteers and attending committee meetings, we're a little late in our mourning for the loss of these men.

There's the superficial stuff, the evidence of the fire's destruction, to be sure.  Fading purple ribbons remain all over town.  Mostly, though, I see rebuilding.  Nine homes were built for our uninsured neighbors with donated funds.  42 building permits have been issued and there is active construction about everywhere you look.  The new places are almost always an improvement.  I don't want to disrespect my little town, but there was (and unfortunately still is) some scary construction. At least one couple was turned down by insurance companies because it was (shall we say) historically built.  Some of our friends have decided to buy an existing home and fix it up rather than rebuild. All of this is breathing new life into Yarnell.

There has been more than home building going on.  Various charities and individuals have worked tirelessly on our community.  The fire department has had donations of equipment and a total makeover of the crew quarters.  The Community Garden was fully revamped. Our water utility has been pulled back from the brink. A collaborative effort has arisen to create a permanent memorial to our losses.

We're much closer to each other, too.  I can't count how many new friends we've made and how many acquaintances have become friends. We have more little parties and we stop to talk with folks we pass on the street much more.

And, as I mentioned in a post last month, we're moving on a bit.  We can talk, sometimes, about normal stuff now, and we're using our momentum to imagine the next projects for the town.

I had an interesting reminder of how far we've come as a community when I was in Sedona just after the Slide Fire.  One of my photography friends who lives there said that he didn't quite understand what we'd been through until he'd experienced a wildfire near his beloved home.

It's not all good, but at least some of it is.

And so, I'm making the mental shift to moving on.  All of us Yarnellians will do that at our own pace, of course.   Last week I was at a Summer Course at Sierra Nevada College (Incline Village, Lake Tahoe) with Jerry Dodrill.  In addition to an opportunity to photograph this beautiful part of the Sierra, the class included a story telling assignment.  I found the making of this short video to be healing.  I hope you enjoy it.

Thanks for accompanying me on this ride.  I hope you'll still drop in on the blog now and then.
Posted by Rebecca at 1:41 PM No comments:


When I was a rock climber, I was consistently impressed by the cooperation among climbers.  Strangers and buddies alike were supportive and kind.  The competition was intense, but only within ourselves.  With each other there was really only thoughtful encouragement.


Last weekend, I asked questions of two photographers whom I respect.  For Justin Black, I had a technical question about a part of an article in Outdoor Photographer on white balance and RAW files (hang in there; that’s as geeky as this post will get) and I asked Tony Sweet to help me find an iPhone app to solve a particular problem I’m working on.  I’ve never met Tony, but he invited the audience (which I was in) at Sedona Photofest to contact him with questions, and apparently he meant it, because he answered my email very quickly.  As for Justin, he’s been the recipient of my technical questions for years because he knows his stuff and is gracious about helping.  He’s a generous mentor.  He had to read the article to answer me and even so he got back to me within a few hours.

Speaking of Sedona Photofest , there’s another delightful phenomenon that I notice more and more.  I got connected with several Facebook photo friends, there in the analog world. That part of my photography community is gracious and generous as well.  They become real friends.

From folks I meet in workshops to photographers I’ve run into on location, I’m impressed that we all seem to be on the same team.

Now, I won’t say that there aren’t exceptions.  There are credible stories about landscape photographers destroying rock formations so that no one else can photograph them.  Sometimes folks decline to help for competitive reasons or are less than enthusiastic about the success of others.  Their remarks might even be disguised as a joke.  You know; “just kidding!”  It’s an aspect of human nature I guess, but it does seem to be rather rare.  Mostly we help each other, and so it’s easy enough to build my community with the right people.

Perhaps I’m a bit of a Pollyanna on this, but cooperation is so much more rewarding than competition, and in photography as in rock climbing, I’m grateful for it. 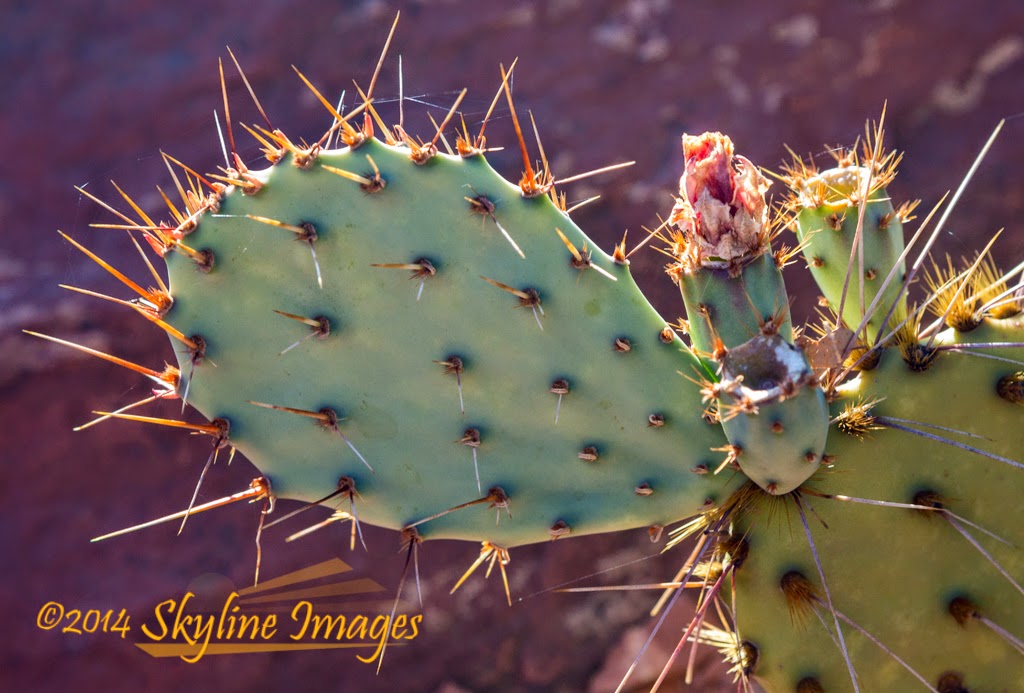 Thanks for being part of the community!
Posted by Rebecca at 10:48 AM No comments:


I had one of those synchronous moments at Sedona Photofest.  Larry Lindahl, who excels at conveying the emotions of the landscape, was talking about how he uses words to help people connect with the natural world.  He journals about the moment in non-visual terms; about the sounds and scents and feel of the moment.

I'd just been reading Austin Kleon.  He encourages artists to share their process, which is something like what Larry said.  Art does not, in fact, speak for itself.  We must speak for it.  That might mean sharing the sensory experience of making a photograph, but it might also be a narrative about conceptualization, preparation, and persistence.

Some of you might have read the back-story of this image which went viral last July after the Yarnell Hill Fire.  It's here in the post about the first eight days after the fire. That, though hard to tell, is one of my favorite stories.  So, here's another.

Last month, I had the privilege to photograph the Grand Canyon from the river on a ten-day raft trip led by Jack Dykinga and JustinBlack.  I wrote about how this trip feelslike a pilgrimage and about the magic of the Deer Creek Patio here. 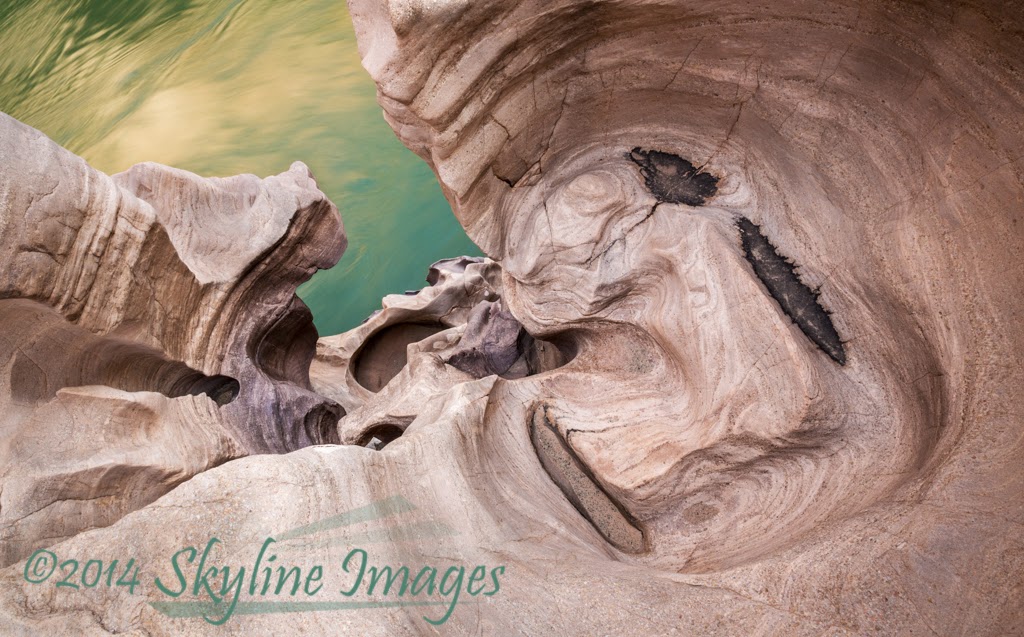 This image was made on the last day of the journey, at a place called Pumpkin Springs, because of its odd shape and color and (it turns out) particularly toxic water.  You may be familiar with this spot near river mile 213.

Raft trips are by definition epic experiences, and we’d had our joys and trials.  We were all pooped from days of blowing sand, and concerned about Jack’s chronic lung disease (at this writing, he’s received a lung transplant and is doing well).  I was tempted to hunker down to a quiet breakfast, but I hated to miss this last opportunity.  Two years before Justin had showed us the oddly eroded shapes in the Tapeats Sandstone near this camp, but I hadn’t come back with an image to be proud of. On this morning the sky was grey and threatening rain.  I’d visualized these tortured shapes with the reflection of sunrise-warmed cliffs in the river below, but there was no warm light to be seen.

So, three of us took off without breakfast, picking our way along the cliffs and looking for a break in the clouds.  As I knew this was prime rattlesnake territory I was looking for them as well.  We knew the group wouldn’t leave without us but we had about 45 minutes before we were late and began to irritate our fellow travelers.  It drizzled on and off, but never enough to make me pull out the camera cover.  Rushing to position tripods over these complex shapes, pointing straight down, proved frustrating for all of us. I ended up adjusting my camera settings to hand-hold the camera, laying on my belly, and leaning into the holes with my wide-angle lens attached.  The breeze carried the characteristic wet, green smell from the Colorado River ten feet below and the canyon wrens were calling from the cliffs above.

From this comical position, I saw the reflected light I’d been waiting for begin to come up below me.  I had time to get off 3 shots and it was over.

We were a bit late, but forgiven I think.

This image made a fitting grand finale for my trip, and I carried the glow with me through the long bumpy bus ride out of the canyon.

As always, thanks for the read.  The Grand Canyon Gallery is here.
Posted by Rebecca at 5:28 PM No comments: