My best guess is that I’ve been to Guatemala 10 times.  Maybe 11.  You might have surmised that I love to be there, but the more cynical among you might also accuse me of a lack of imagination.  You wouldn’t be wrong, I suppose.


I struggle with travel plans, especially this balance between breadth and depth.  There’s certainly an inner voice which urges me to experience new places.  There trips are exciting and fresh.  I feel as if everything I see presents an opportunity to learn.  In September my husband and I traveled to the western part of Mongolia, an area which was completely unfamiliar.  That journey broadened our world horizon.

Readers of this blog will recognize that Guatemala is not the only familiar place that draws me back.  A depth of experience helps me produce better images and understand more profoundly. There’s also the sense of belonging and homecoming that repeat visits afford. Perhaps the best example is the Grand Canyon’s North Rim, which calls me back season after season.

Though I also return often to Death Valley and the Mojave, the area is so vast that there are always new areas to explore.  Today I made a wish-list for our solstice trip this year.  I’m as excited as I was for the very first visit. This area might be the best of both worlds, with both old favorites and new discoveries.

During the recent Through Each Other’s Eyes exchange in Guatemala, I had the opportunity to see parts of the country which were new for me and to look at the whole experience in a different way.  Still, bringing my previous experiences and assumptions (not all valid!) informed my photography and, I hope, will make for a richer exhibit in the spring.

I’ve included some older favorite images.  Technology has moved on quite a bit in 10+ years; I hope the strength of the images can overcome their limitations.


I’m grateful that I can opt for breadth AND depth.


Stay tuned for more on the TEOE Guate Exchange exhibits, February-May 2020.
Posted by Rebecca Wilks at 11:35 AM No comments:

Through Each Other's Eyes

Cows.  That was the running joke because Geoff wanted, repeatedly, to stop the car and photograph cows and more cows.  As you can see, I came home with a cow shot as well. 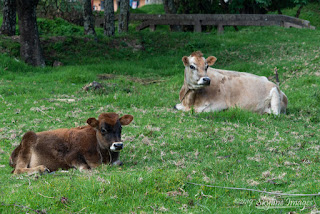 We were in Guatemala for 10 days, completing the exchange that began last March here in Arizona.  Our Guatemalan counterparts returned the favor and hosted us in their country in grand style.  These cultural exchanges are the primary mission of Through Each Other’s Eyes (TEOE), which I’ve been involved with for a couple of years now.

Until this trip, I’m not sure I’d fully grasped the concept embodied in our foundation’s name.

My traveling companion, Geoff, and I noticed and formed an impression of things in Guate that surprised our hosts.  Like cows.  I have some other examples for you. I think some of them seemed ordinary or at least unremarkable to Rony and Javier.
Dogs.  There are dogs just about everywhere you look there, making a living on their own.  Though wealthier Guatemalans often keep pets, indigenous people in the highlands seem unsentimental about them.  I joked that I’d do a series of images called “Dogs as Foreground,” but in the end I only really liked this one.  I particularly liked this girl, and if she had been, for example, on the Navajo Reservation she would have come home with me. 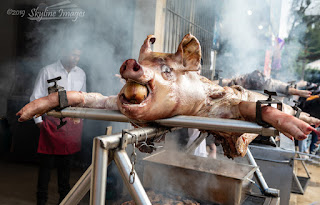 Street food.  Wow.  It all looked so good, but Rony and Javier, looking out for us, wouldn’t let us eat it. I particularly wanted ceviche but of course they were right.  I’ll give him credit because Geoff and I both got through the 10 days with our intestines intact. Their one concession was churros (what bacteria could live through deep frying?).  They made up for our deprivation by taking us to some really great restaurants and cooking memorable meals as well. 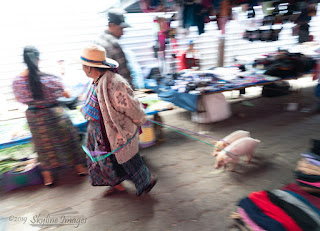 Markets.  People really do their shopping in these open-air emporiums.  The guidebooks all tell us to go to Chichicastenango, but our hosts did much better.  I’ve been to Chichi and found vendors really hesitant to be photographed.  We were in markets in Guatemala City and Tecpán and had a much more photo-friendly experiences.  In Tecpán, we saw (for example) live crabs, a woman walking around with piglets to sell, and a guy who was clearly not a zombie (opening image).  Really, I was walking around with a silly grin on my face all morning.
Family.  The emphasis on family in Latin America is almost Cliché, but it’s a thing.  We saw families working together in markets and playing together along the shores of lake Petén Itzá.  For better or for worse, kids are out with their families.  I must admit I cringed whenever I saw Dad, Mom, and 2-year-old together on a motorbike, without helmets.  Some cultural differences are harder to bridge.
We spent a morning in Sumpango witnessing celebration of All Saint’s Day.  Folks come to honor loved ones who have passed, decorating the cemetery.  Meanwhile, there’s a festival of giant kites.  And street food. And crowds (yikes).  It was all a bit overwhelming, but in a good way.
That afternoon Javier and his family invited us to their party.  It was a big celebration at Doña Isabel’s house with 50 or so people.  Her husband had died just a month before.  It was a testament to her graciousness that we gringos were invited.  She seemed to me to be all heart.  The delicious traditional Guatemalan food for Dia de Todos Los Santos is called fiambre.  It’s a mixture of pickled and fresh vegetables with meats.  Doña Isa leads the preparation of this fabulous meal each year, which is concocted in a huge plastic vat which everyone calls her “jacuzzi.” As if there weren’t enough people to feed at the party, the fridge was packed with fiambre for friends.

Color.  Geoff kept saying the we need more color in the states.  I think that sounds good in theory, but for some reason my suggestions about colorful clothing for him in the markets fell on deaf ears.  At any rate, we loved the colors of structures as well as the colorful clothing that indigenous Mayan women often wear.  Both are photogenic and help us convey a sense of place.
The landscape.  Guatemala has plenty of relief (including volcanoes) and beautiful bodies of water.  As much time as I spent making images of people, I was happy to return to landscape; my first love.

Work from all four of us will be exhibited in Arizona.  February 4 – April 12 you can see it at Grady Gamage Auditorium in Tempe.  Gammage is open to the public Monday afternoons.  April 14 – May 31 we’ll be exhibiting at Burton Barr Library (the main downtown branch) in Phoenix.  I'll let you know when we have the reception scheduled; we'd love to see you.  I hope you’ll come out and perhaps see a bit through our eyes.
Posted by Rebecca Wilks at 5:52 AM No comments: