Well, my friend Kim and I have had another trip to the Desert Photo Retreat in Southern Arizona.  I blogged about it after last year’s trip.  Again we managed to hit the one unseasonably warm weekend in March, but other than that the trip was delightful.

I learned so much.


First, emotion.  I’ve been thinking on and off about the challenge of conveying emotion in images of landscapes and of details in the natural world.  It can be done but is a rather subtle thing.  Shooting at the Retreat gave me a chance to approach the challenge with critters instead.  We perceive emotion in faces naturally, including those of animals.


During the always fascinating Out of Chicago Live conference this month, one presentation addressed the rewards of photographing common things that are often overlooked.  The presenter used dandelions as an example. I decided, while shooting from the Retreat’s blinds, not to overlook common things like squirrels and house finches.  Once I took some time to look at the “dandelions, there was so much to see.


Finally, I got out of my comfort zone, learning to use my new Pluto trigger for camera trapping.  Thank goodness for Ron, who’s very experienced and a great troubleshooter. His suggestion about a setting buried deep in my camera’s menu fixed a problem so the second night shooting could be successful.  Kim helped me to remember that what I learned that first night is more important than the shots I might have missed.  Speaking of Kim, because of all the equipment that she brought along, we managed to set up three stations on the second night and had some nice shots.

I’m inspired to start working on this project in my own back yard, where we have quite a few mammals running around at night; fox, bobcat, skunk, racoon, javalina, and the occasional mountain lion.  Stay tuned. 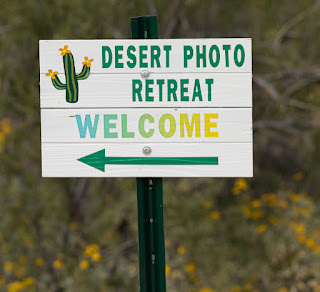 We’ve booked three nights for next year to give us an even better chance at (ahem) education.

More favorites are in the Spring 2022 Gallery on the website.

Posted by Rebecca Wilks at 8:49 AM No comments:

I’ve really said enough about the wind in the Mojave Desert.  Blah blah blah.  I’ll just say that the sprinter is much more wind-stable in camp, which leads to a better night’s sleep.

A month or so ago I contacted the Needles CA BLM office and had a lovely conversation with a ranger there.  She helped me plan a boondocking visit to the edge of a wilderness area in Mojave Trails National Monument which had been on my list for years.  She was generous with her time and knowledge as I followed along with her on Google Earth.  She even invited me to call if I had more questions, which I will of course.

I wanted quiet places, and we got them.  We could hear the trains, but otherwise I’m sure there was nobody within 10-15 miles of us. These areas are a little stark, photographically. In my world, that’s nothing more than a fun challenge.

The first night we were at my Ranger friend’s pick, a quiet spot with fascinating geology.

Then we moved on to a small perennial spring.  I was staked out in the viewing area for hours, expecting (as dry as the weather has been) to see wildlife, but saw just a few small birds and heard the distant yip of coyotes just before dawn.

Speaking of dry weather, in three nights we didn’t see a single wildflower.  The first spot has fairly heavy growth of brittlebush, but not a single bloom.  I’ll need to go back there in a wetter year.

The temperature got up into the 80s that second day, and we decided to go to a higher altitude for our last night.  We’d tried Mid Hills Campground in the Mojave National Preserve before, but had turned back on the muddy roads on the way in.  This trip we only needed to brave the washboards.  We had a spectacular campsite in the piñon juniper forest with views. The wind had abated and at 5600 ft elevation it was a great day for reading and exploring.

Three entirely new places and some soul-cleansing peace; what more could a girl want? Change is good; wind not so much.

As always, there are more images on the website.

Posted by Rebecca Wilks at 8:23 AM No comments: