The Airport Had An Outhouse

It’s been a while since I blogged.  Have you missed me? My distractions are not at all interesting; moving and escrow.  In a remarkable feat of timing, my husband and I were halfway to Mongolia before the house sale closed.  Despite being in South Korea, we were (and still are) thrilled to have just one house, in Yarnell Arizona.  Never mind that we can’t live in it yet.


Yes, Mongolia.  Now I have something to blog about.


I’ll share a little background, if you’ll indulge me.  I met the legendary Dave Edwards when he was trip leader on a Grand Canyon raft trip perhaps 25 years ago.  That was the first time I gave Mongolia much thought.  I saw some prints that he was carrying with him, and I suppose that planted a seed.  Dave started going to Mongolia in the early 1990s, when the country had just broken away from the Soviets. He says that hotels and restaurants were scarce and tells harrowing stories about having been arrested, for example.


And some of you think I’m adventurous.

Dave had a spread in National Geographic Magazine in September 1999, and one of those photos (above) was honored as one of the top 100 Nat Geo images. He founded the Flagstaff International Relief Effort (F.I.R.E.), a non-profit organization dedicated (at that time) to the collection and distribution of winter clothing and medical supplies to the impoverished population of Mongolia.


That’s where the circle connects.  I’d been to Mongolia in 2006 on a medical trip, so when I heard about a Rotary Grant for disease prevention and treatment in Mongolia, I popped my head out of my figurative cubicle.  I got involved in fundraising for the grant among Rotary Clubs in Arizona and Mexico.  Eventually I realized that the nonprofit partner for the project was F.I.R.E., the very same organization that Edwards founded in the 1990s.


This trip was organized by F.I.R.E.  Small world.  The opportunity to travel with Dave, now 78 years old, dissolved the last bits of resistance I had to signing up.


We spent some time in the capital, Ulaanbaatar, but the real story is in the west, in Bayan-Olgii Aimag (Provence).  My favorite way to convey the remoteness of Olgii is to point out that the airport, 2 hour’s flight from the capital, has an outhouse.

Our host in the west was Kobesh Travel, headed by Agii Makhsum.  I’ve got only great things to say about Agii and his folks.  They anticipated our every need, from stoking the stoves in our gers in the morning to heating water for our bucket baths.  Nurbakhyt (Nurka) Marat, our head guide, even invited us to tea with her family during our nine days on the road.

We made three camps, and that’s where the stories are.


Auez is a champion racehorse trainer.  Our first stop was his family’s summer camp.  Eventually we learned that his charming 12-year-old son Janibek was the star of an independent film called Boy Nomad when he was nine.

There were some serious equestrians in our small group, but that’s not me. After the first day riding (I lost sensation in my feet from the cold) I decided that I’d enjoy (and photograph) better hiking and riding in the 4WD van. For two days I did just that.  The scenery was stunning and mostly unique, although we were sometimes reminded of Death Valley National Park at home.

Hunting with eagles on horseback is an ancient tradition among Kazakh Mongolians.  Typically practiced with Golden Eagles in the winter pursuit of foxes, it is a source of great regional pride and has spawned several festivals.  More on that later.

Tabai is a gregarious grandfather, and recently retired (highly decorated) Eagle hunter. His son Chokan is actively hunting and is training three young eagles.  Chokan was our model.


The second place we stayed was at his family’s summer camp.  It’s notable that the day of our arrival, they all moved out of the family Ger and into a wooden building.  It had gotten too cold, he said.  I can’t disagree, as we woke to gloriously photogenic snow one morning. 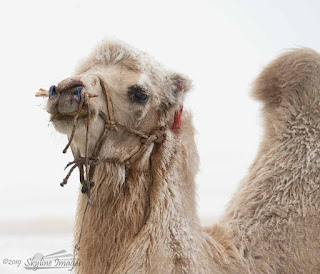 Their camp was fascinating, with a full spectrum of livestock (including a camel) and an opportunity to see the slaughter of a sheep and the training of the young eagles.


We went twice to photograph Chokan with one of the eagles in the mountains.


The full moon rise was a real bonus.

Finally, we re-positioned to be near the Altai Eagle Festival.  Camp was at lake shore, ten minutes drive from the festival and was ideal for morning walks and photography.


There are several festivals in the region, but this one is a bit smaller, and (I’m told) less overrun by foreigners like us.  Festival events include hunters calling eagles while on horseback and running with a fox hide as bait.  There were also traditional games including “Goat Pulling” (a sort of mounted tug-of-war with a headless carcass), picking up flags from the ground at full gallop, and an agility riding contest for women which resembles barrel racing.  There were 68 participants.  Imagine what a thrill it was for us to see Golden Eagles (with wingspan as large as 7 ½ feet) everywhere we turned!


There were vendors of food (we loved the lamb kebabs), souvenirs, and local favorites like whole eagle wings and fur coats and hats from many animals.


Agii arranged for an alfresco concert at camp after the last festival day, which included a champion throat singer accompanying himself of the Morin Khuur (horsehead lute; the national instrument of Mongolia).


There’s more; shopping and museums and fancy restaurants (yes, really) in Ulannbaatar before heading home.  I’ll leave you with these images of the Kazakh West though.  That’s what stays in my mind. 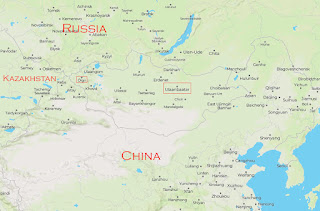 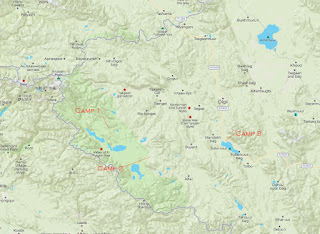 Posted by Rebecca Wilks at 12:02 PM No comments: