I loved the opportunity to do a family camping trip to the Grand Canyon’s North Rim last week, though they’re a little different than the solo jaunts.

The National Park itself is rather restrictive about dogs, so we’ll have to delay some of those in-park things until we’re on a trip without Luna.  She’s 12 years old now, so we’ll treasure the time we’ve got. There are plenty of fabulous things on my running list in the Kaibab National Forest, and plenty of dispersed camping.

In fact, we made three trips into the Park, but two were just for potty breaks and to jettison trash.  The “Find Your Park” campaign has been quite successful.  Marco suggested that the next big advertising push be something like “Find Your Major Metropolitan Area.”

I strive to find camping spots near great places to shoot at sunrise.  That way we can all sleep later, but especially so that Marco and Luna don’t have to roll out in the dark.  We call these “bumper belays,” after a rock climbing expression which means there’s no hike from the car to the climb.

Luna (and Marco, if I’m honest) have a tendency toward boredom, so I do need to tailor the rhythm of the trip to them a bit, especially curbing my desire to crawl on the ground doing macro work when they’re standing around waiting.  There’s a bit of a challenge, too, the three of us living in a small space.  I couldn’t do this with any human other than my husband, and the dog, well the older she gets the more flatulent she is.  I’m sure it’s only the dog.

Despite all of this, we had a great time.  These trips encourage us to be spontaneous; after all we can camp wherever we like. We hit old favorites and found a new one we liked so much that we returned for a second night later in the week.

When I was last up, in June, high temperatures were an unprecedented 95.  We had enough monsoon storms to keep the ceiling at about 75 this time.  Things were green, wet, and blooming and there were mushrooms roadside.

Rather by chance, we ran into Paul Gill and Gary Smith, both Four Wheel Camper on-a-Toyota truck people.  We had a sort of impromptu convention at Marble View complete with fresh-baked chocolate chip cookies and good red wine.  This is a lovely spot which is famous for its wind.  I don’t love fighting the gusts, but there are lovely wind-blown trees there and low-growing plants which make the area look something like tundra.  Mercifully, there are places to camp among the trees and out of the wind.

Our fifth and final night was at an old favorite, Crazy Jug Point.  I’d been a little disappointed that the light was mostly uninspiring in the early part of the trip, but we had a spectacular sunset, full moon set at sunrise, and the lovely morning backlight that keeps me coming back to this spot.  We met our friend Gaelyn Olmstead there and enjoyed catching up almost as much as sharing her brownies, strawberries, and ice cream.  Gaelyn is a Ranger at the North Rim and a prolific blogger.  She often says that Rangers get paid in sunsets.  That last night I felt as if I were garnishing her wages. 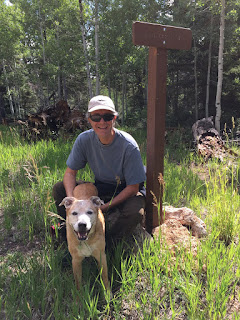 Mostly I travel alone.  Marco had such a good time, though, that he might like to come back when the aspens turn.  Luna says she’d like that and I would too.  We’d better get to it while the dog still has the energy to gallop down the trail with her ears pressed back.

More from this trip are in the Grand Canyon Gallery on the website.
Posted by Rebecca Wilks at 2:58 PM 4 comments: