Stop and Smell the Cliffroses


“Doing nothing often leads to the very best of something.”  --Winnie the Pooh


“The main problem with this great obsession for saving time is very simple: you can't save time. You can only spend it. But you can spend it wisely or foolishly.”
― Benjamin Hoff, The Tao of Pooh


It had been three months since I’d had actual alone and quiet camping time.


My readers know that I’ve had some photography adventures since then, including the Arizona adventure with our Guatemalan friends, A manic run across southwestern Utah,  a Grand Canyon raft trip,  And the Oregon Coast trek.  I’m not complaining.  I just need a periodic dose of genuine quiet.  A chance to do some “nothing,” as Pooh says.


So, I was off to the north rim of Marble Canyon, which is insulated from crowds by obscurity and sometimes challenging dirt roads.  Many thanks to the Kaibab National Forest for that.  I was ready to practice mindfulness while doing nothing.

On the way up I stopped at Navajo Bridge.  I’ve had good luck this year seeing California Condors there.  These huge birds are part of a re-introduction and breeding program and once they’re a year or two old, they have number tags on each wing and a radio transmitter.  There was a bird on the bridge and one which passed just a few feet over my head.  This stop was a little different because there was a biologist from The Peregrine Fund there, listening for radio signals.  She was so kind and patient answering questions and holding what amounted to an impromptu interpretive session.  This bit of serendipity set a lovely tone for the trip.  I’ve since made a donation in gratitude. 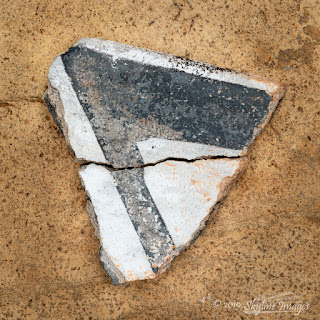 Deep in the Saddle Mountain Wilderness, in a new favorite spot, I found this while lying on the ground photographing a flower.  Now, I’ve seen old potsherds before in museums and even in more trafficked areas like the Unkar Delta deep in the Grand Canyon.  This was the first time I found one on my own, though.  From the way it was embedded in the soil and tucked under a dead branch I imagine I was the first to touch it in some time.  The thing is, I had a surprisingly strong urge to put the two pieces in my pocket.  Don’t worry; I photographed it and put it back.  Reluctantly.  In addition to the images, I brought away a lovely sense of connection with the woman (because chances are...)  who used it, perhaps to feed her loved ones. When I got back to camp, I posted pictures on Instagram and Facebook.  I learned so much from the feedback of a couple of learned friends, Craig Childs and Larry Lindahl.  This magic piece of history is about 800 years old, Ancestral Puebloan Kayenta Black on White.

There were lots of other thrills, too.  Our wet year here in the southwest continues to give us flowers.  I was at about 6000 feet elevation, so it was a good time for lots of flower species, including cactus, larkspur, yucca, Indian paintbrush, and a proliferation of cliff rose blooms I’ve never seen before.  One of my favorite things about cliffrose is that I smell them before I see them.  So, I stop and smell the Cliffroses.


I find that, traveling alone, wild critters are more comfortable around me. The acrobatic violet-green swallows at the canyon rim buzzed my head and a jackrabbit stopped within a few feet of me and stared.

I’m not so good at identifying grasses, but I will say that I was stirred by their glow with the rising sun behind them.  Another moment.

After a couple of nights at home, and just for the heck of it, I camped at Watson Lake Park, in Prescott shooting and kayaking.  I shoot there a lot, of course, and its less than an hour’s drive from our home in Yarnell.  I thought it might be fun to take lurch out there.  On the way I stopped at AT Overland and brought my questions about Lurch to Martyn there.  I got some good advice, of course.  At one point he asked how aggressive I was off-road.  I told him I thought I was intermediate – I’m not into getting stuck just for the sake of using my recovery gear and skills.  I wrote about this a while back.  I bragged a bit about the Death Valley trip and this one to Marble Canyon.  I had to sheepishly admit, though, that I was on my way to Watson.  Sometimes doing nothing means driving to the campsite on pavement.  Its just as well, I suppose, since my husband had just washed the rig.


Fate had the last word, though, since there was an all-night highway maintenance project going on.  Right next to me.  I did nothing all night long…


More images are on the website, in the Northern Arizona Gallery
Posted by Rebecca Wilks at 7:15 PM No comments: