After last week’s Southern Oregon Coast expedition with Colleen Miniuk, I got to spend three more days with my friend Amy.  We stayed in a little house in Newport and had the luxury of some time to hike and chat.  She knows that at such times, I sometimes think about the theme for my next post here. I gratefully give her credit for the idea on this one.


Colleen set the stage for our wanderings by talking about this life philosophy; saying yes.  She reminded me that the first rule of improvisational theater is to say “yes, and…” This is the way of going forward into story, and ultimately into a rich joyful life.


She went on to talk about something she learned in writing workshops with Craig Childs (whose writing I adore).  He says, apparently, that the way to have experiences that create stories is to put yourself in interesting situations where things are likely to happen.  Courage.  This reminds me of a good friend who, I'm sure, will be thinking of the story even before he’s sure he’ll survive unscathed.  He’ll recognize himself, I know.


If I’m honest, I’ll say that my first reaction to something new is likely to be a “no.”  I’m not proud of this, but it comes from aspects of my upbringing.  One of the privileges of middle age is to recognize our biases and work around them.  Just because my first reaction is negative doesn’t mean I have to stay with it.


If I had any doubts that I should write on this theme, a bit of serendipity convinced me to forge ahead.  Two days after I got home, once the laundry was done and bills paid, I stumbled on a Netflix video from Brené Brown in which she talks about courage.  Specifically, she persuaded me that courage is only possible with risk and uncertainty.  In short, we must be vulnerable to be courageous, and that’s scary.


Saying “yes” in my creative life might include going to a location which requires a little courage, pushing past the desire for comfort (laziness), or curiosity and experimentation.

On this trip, I worked on some more abstract images.  The stunning reflection in this image lasted all of twenty seconds so I only got one chance. It’s a little different for me artistically, and I really had to work on the “yes” which was showing it to the group.  This one paid off, with kindness and support from my fellow travelers.  Brené Brown does make the point, though, that when you’re committed to being vulnerable in this way you’re going to fail, a lot, and that perhaps having taken the risk is the real success.


A disclaimer; there are some things that the “yes” should not be.  It is not, to quote The Eagles, “everything, all the time,” nor is it a sort of manic forging ahead without pause.  Though Colleen loves to say, “you can sleep when you’re dead,” I’m enough of a sleep junkie that sometimes I’d best say “yes” to the nap.

We had a very windy, socked-in evening at Face Rock Beach in Bandon.  We all bundled up and hesitated at the top of the stairs to the beach.  I probably won’t take any pictures, I thought, but I’ll carry my gear down there and just have the experience.  Sometimes I have to accept the challenge in stages. I did shoot, of course, and ultimately I found some things I really liked. The best of those is this long-exposure shot.  I needed to hold my tripod to keep it from blowing away.

Another morning the full moon was setting over the ocean.  Once I realized that I could catch it in the notch of the arch rock, I shook off my native laziness and jogged down the beach in time to capture this, one of my favorite images of the trip.

With the full moon comes excellent low tides.  At Yaquina Head Outstanding Natural Area (yep, that’s really what the sign says) the tide pools are fabulous, but slippery.  When you add to that the need to get me and my tripod low on the rocks and cast shade to eliminate glare, it’s a bit of a contortionist act. I’m so glad I did, though.

Cape Kiwanda was an enroute stop for Amy and me.  We didn’t expect to find such great shooting there, but the angry skies and ocean were irresistible, despite the need to scramble on the rocks as the tide came in.  It was a black & white shoot, any joyfully so.

Sometimes I must stop and shoot even when the setting is absurd.  The lilies were planted just outside the restrooms at Shore Acres State Park.  Don’t tell.

The Oregon Coast Aquarium in Newport was a convenient grey-day stop and gave us a great opportunity to photograph captive shorebirds.  Puffins are irresistible.  We said “yes” to something rather off the beaten path of nature photography.


And, just between you and me, making my writing public in this way feels rather vulnerable as well.  Thanks for riding along for the failures as well as the successes.


More images are in the Pacific Northwest Gallery on the website.
Posted by Rebecca Wilks at 1:21 PM 2 comments:

Well friends, I’m finally clean and rested.  The laundry is done and the camera gear is clean so I’ve had some time to reflect on my eighth river trip in the Grand Canyon. 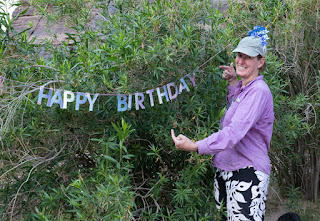 I’m older and slower, and I must admit a bit creakier.  This, and the honor of a birthday in the Canyon (sorry about the picture – I was looking pretty rough by day 10!) made me feel a bit philosophical.  As a rule I am proud of my independence.  Perhaps too proud.  When I was 20 (when I took my first raft trip, give or take) I could handle pretty much all of the physical stuff.  This round I had a flare-up of back pain.  As often happens, life teaches us those lessons the hard way.  I needed help and had to get comfortable with accepting it quickly.  My sister calls this “gracious receptivity,” which might be expressed more bluntly as, “stop fighting the situation and accept what’s being offered.”  I’m grateful for the lifting help, the drugs (!) and the kind words from my fellow travelers, most of whom I’d only just met that week.

I keep saying that each trip is my last, but have learned enough to not say that again.  I’m connected to this place and wouldn’t be surprised if I found myself ensconced in its splendid energy again.

In order to share a bit of the trip with you I’m going to pair some quotes and song lyrics that popped into my head or jumped out of things I’ve been reading with a few images.  As always, there are more on the website, this time in the Spring 2019 Gallery.

“Art doesn’t happen unless you can rest enough to take the time.”  ~Christa Sadler

On the very first day of the trip I had the luxury of time to reflect before whipping out the camera.  I was thinking about the profusion of flowers this year and about how easy it would be to run around doing simple portraits of flowers.  Instead, I decided to undertake a somewhat more ambitious (and, I hope, interesting) project.  I call it “flowers in context,” giving some sense of place to the images.  This is the first of those. The tamarisk is a rather aggressive invasive plant in the Grand Canyon. It doesn't get much love.  Its grace against a background of the moving river caught my imagination, though.

“Seek not to change the world but choose to change your mind about the world.”
~A Course in Miracles

At our ninth and last camp, I had some time alone with the reflections and rapids at river mile 215. Long shutter speeds can transform a chaotic scene to something else entirely.  With the blessing of reflected light from canyon walls across the river, this scene blew my mind.

This one popped in and out of my head for several days but was especially persistent during the glorious hours we spent in Matkatamiba Canyon. I love this place and am in good company; it surfaces on the favorites list for many.

Fear tells you to fulfill the expected.  Love says, "May I have this dance?" ~ Emmanuel via Pat Rodegast
“Who will tell whether one happy moment of love or the joy of breathing or walking on a bright morning and smelling the fresh air, is not worth all the suffering and effort which life implies." ~Erich Fromm

Yeah.  Suffering.  This is where my back started acting up.

I woke up with a full bladder at around 4:00 AM at Ross Wheeler Camp and saw this.  By the time I’d taken care of the first issue, the moon had shifted enough that I needed to move my tripod near the head of a sleeping comrade.  Fortunately, he’s a heavy sleeper.  Like many night images, the camera reveals much more than the human eye, so the colors in the clouds exceeded my expectations.
And, perhaps a bit trite, from Rainbow Connection,

“Why are there so many
Songs about rainbows
And what's on the other side...
Someday we'll find it
The Rainbow Connection
The lovers, the dreamers and me”

We thought the show was over when this sent several of us running to retrieve our gear again.  Rainy weather cam be a blessing indeed.
And finally, a portion of a  poem written by Grand Canyon River Guide Katie Proctor during my 2009 trip.  I’ve quoted her words before, from Raven Awaits,

"You were there...where Water blasted over Rock, careened through narrow canyons and seeped quietly down salmon colored stone…You were there when you realized this place was not magic. Its real! Its affects, real! Reality doesn’t hold a candle to the realness of this place…You were there when subtly, slowly Rock revealed to you that something so solid and still can move you. Be moved. You can move mountains. You were there in Rock’s presence when your power scattered and just before you uttered the word to your friend that these walls make you feel “small”, “insignificant” you remembered your place. you may have previously thought that your average size footprint didn’t matter much at all in this Grand Scheme. But now, Clarity."

Thanks for riding along with this middle-aged woman and the songs and poems in her head.