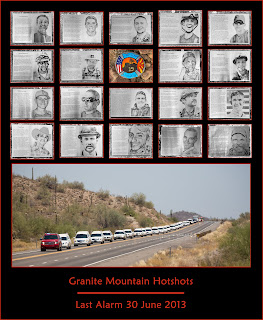 Bronze and pottery.  These are the traditional gifts to commemorate an eighth anniversary.  They’re symbolic of the creation of something tougher; pottery from clay and Bronze from iron and copper.  Nothing, of course, can bring back the 19 brave men lost here on June 30, 2013, but our town has grown stronger even as we’ve lost our innocence.

The Yarnell Area Resource Group (YARG) asked that I photograph the plaques commemorating each fallen firefighter on the trail at Granite Mountain hotshot Memorial State Park. They used the images in the remembrance concert today. It’s June, of course, so I was up at 4:00 yesterday to I could hit the trail before sunrise. It’s a great hike, and I’m up there a lot.  It can be easy to forget the losses honored here, but this trip was a homage for me, stopping at each plaque to contemplate each man for a moment.  It was less acute than my first homage, photographing the coaches carrying remains from Phoenix back to Yavapai County, but no less heartfelt.

We’re still grateful here, and still mourning. We still think of life in two parts, “before” and “after.” Frequently the fire is still what we’re known for.

Monday there was a surprise for Frances Lechner, a truly tireless local volunteer.  Frances was met at the new park by AZ CBS 5 news with the “Pay it Forward Award,” a $500 prize for extraordinary volunteerism.  Frances has worked in many areas in town, including the Yarnell Hill Recovery Group immediately after the fire, as well as the Community Garden, Regional Community Center, and Fire Auxiliary. Many friends were there to witness her recognition. The story is here.

This afternoon, our annual memorial event remembering the fallen was combined with a dedication of the park in Yarnell.  The Park has been a long time coming and we’re all very excited to see it complete.  The project has been completed in cooperation with Arizona State Parks. The design was created by the Frank Lloyd Wright School of Architecture.  One fundraising effort was the sale of decorative bricks.  I was pleased to see one we purchased to honor my dad in place there. 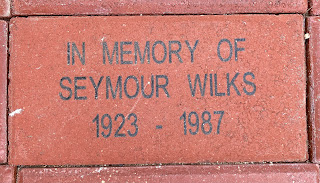 For the eighth year, the names of the fallen were read by Lew and Marcie Theokas, whose grandson was lost that day. A bell was rung after each name.  The slow and orderly listing brings to mind my walk on the trail yesterday, past the 19 plaques in turn, and of what a large number 19 is.

A few more of my posts about the fire are here:

After the Yarnell Hill Fire; the first eight days

Chicken Soup From Yarnell #5; Moving On

Posted by Rebecca Wilks at 6:19 PM No comments:

I had a quick trip to the South Rim of the Grand Canyon.  I like the occasional stay at Desert View Campground.  It's still a campground (too much humanity), but has the advantage of easy walking access to a number of lovely canyon vistas. This place used to be first-come, but this season they made the change to a reservation system.  I'll roll with it, planning further ahead.  For the record, though, there are always 10% or so of the sites that are not used, so the reservation system does create some waste.

We're still waiting on the start of our monsoon rains this year.  The pervasive smell of smoke is a potent reminder of the land's vulnerability and frankly it sets me on edge a bit.

That being said, smoke can create some lovely effects, warming and saturating sunrises and sunsets and providing atmospheric effects and a sense of depth in photographs.

All of this was particularly impressive on my last morning.  I woke up in the middle of the night finding that the smell of smoke was much stronger.  I stuck to the plan, packing up in the predawn dark (sorry about that, campground neighbors) and scooting to Lipan and eventually Grandview Point for a new angle on sunrise.

I've never seen these stunning conditions before.  This odd combination of beauty and tragedy reminds me of the photography of Daniel Beltra, who does some amazing things with this intersection.  Check out his Gulf oil spill images.

I could still smell the smoke on my clothes after the 3-hour drive home.

Speaking of backlight, here's an image from Watson Lake in Prescott Arizona, my home turf.
Posted by Rebecca Wilks at 12:04 PM No comments:

I’m just back from my first North Rim trip of the season.  Technically, we were not in Grand Canyon National Park (except for about 10 minutes; more on that later), but rather in the North Kaibab National Forest.  Typically I make this trip 3-5 times each year, from shortly after opening May 15 to a fall color trip in late September/early October.  Lots of things have changed, for me and for the forest.  For years I camped primarily at viewpoints, photographing the grand vistas.  They’re breathtaking to be sure, but lately I’ve been motivated by a search for solitude and more intimate landscapes.  I’ll just note briefly (and skip my usual rant) that as camping has become astronomically more popular, those viewpoints are crowded.  More on that later as well.

The Arizona Trail runs through a series of meadows on the “East Side” (of highway 67) which are spectacular and little-used.  We found camps near where the trail crosses forest roads, and so had easy access to hike these sections and sort of stitch them one-by-each.

Spring is fully underway in most parts of the forest, but cold air settles into the lower meadows at night, delaying the greening of the aspen trees.  One morning it was 30F, compared with 50F up on the roads.  There were large swaths of aspens doing a credible impersonation of winter there in the low places.  Some trees were just beginning to leaf out.  As an illustration of how much I love these beauties, I’ll admit that I find infant aspen leaves cute.  Really.

We stay out of the park on “family” trips because national parks are not so dog friendly.  There is, however, a trash drop and porta-potty a few miles inside the entrance gate.  No, I wouldn’t have paid $35 for this service alone, but it seemed a reasonable use of the annual pass. The lines at the North Rim Entrance are minimal and the drive is gorgeous.  That’s the unglamorous story of our 10-minute visit to the park.

My mom’s health has been tenuous, and I wanted to be available to my sister, her primary caregiver.  So, we tried to camp where there was a phone signal.  Normally connectivity is only available at those crowded rim spots I mentioned earlier.  We tried Marble Viewpoint, which has become a worst-kept secret. There were five groups camping at a place which really should only have two.  We compromised, moved away from the edge a quarter mile or so, and walked out periodically to catch the signal.  Still, I had to don medical gloves and gather up TP (my husband calls them redneck prayer flags) and other trash before we could feel comfortable in that space. Perhaps that’s why we had so much trash to dump.

After that night, we decided we’d just drive or hike to a spot with phone service (and a pit toilet; such luxury) each day and depend on my Garmin InReach (which allows satellite texting; great for the solo traveler) for the in-between times.

That’s when we hatched the plan to do a little exploring in hopes of finding quiet places and hiking the meadows.  We didn’t see a soul for 48 hours at least and the dog was in heaven.

Signs of spring were everywhere, and the aspen groves were healthy and pristine.

We’ll be back to the meadows for autumn, and likely before.

Posted by Rebecca Wilks at 11:40 AM No comments: