Because You’ve Been Wondering…

I’m recently retired, and I know how time can fill up of its own accord. I’ve resolved to be vigilant.  Well, if I’m honest I’ll admit that I’ve accepted some new responsibilities so there you go, but,


Examining my priorities, I turned down several opportunities to do group travel in order to free up time for road trips.


You know, there’s a lot to see out there in Arizona.


I tacked a sunrise shoot and hike onto a lunch date in Sedona in the middle of June.  Slide Rock State Park, an absolute zoo with swimmers and picnickers on summer weekends mid-day, is deserted and spectacular early in the day, the sun lighting the high cliffs above the creek.

Later, a couple of days on the Mogollon rim gave me my solitude fix.  The trick here is avoiding weekends and holidays, of course, so I showed up on July 5.  I did a lot of exploratory hiking (one in 95-degree temps) and driving, sadly not finding anyplace I wanted to come back and photograph in better light.  That’s disappointing, of course, but (as I say frequently enough to annoy my friends) if it were easy, everyone would be doing it.


I was at a Rotary Conference (those other commitments!) in Orange County CA and afterward spent some time with family in my home town of San Clemente.  The nice weather alone would have sufficed, but somehow I always manage to find a new perspective on this beach town I’ve been photographing since the 1970s. 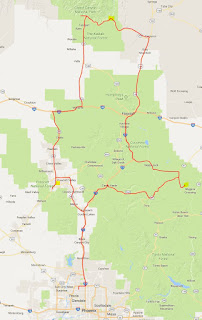 More recently I made a rather large circle around Northern Arizona.  The Mogollon Rim was delightful, despite another exploratory drive that didn’t amount to anything, and a closed road.  Why closed, you ask?  Apparently a tractor-trailer driver thought he’d follow a forest road “shortcut” suggested by his GPS.  No one was hurt, but the trailer was over the edge.  FR95 is well-maintained, relatively speaking, but no place for interstate trucking.


I ended up hiking around in the rain in East Clear Creek, a rather nice spot.


The next day (after, you guessed it, some more fruitless exploration) I met up with Jeff Maltzman, one of my favorite traveling companions, and headed to the Grand Canyon.  A Monsoon storm with rainbows and lightning rewarded us, and this time we explored and found some locations that could be really promising on another trip.


Though Jeff and I had planned to spend another night camping, he heard from his wife about one of those homeowner emergencies which make you want to walk away and join the circus.  Still, we hated to scrap our plan entirely, and so had lunch at the incomparable El Gato Azul, a Tapas place in Prescott.  Afterward we said our goodbyes, then we said them again when we met up so he could return the two-way radio I’d forgotten to ask for earlier.  It’s almost surreal to eat in a nice restaurant and shop (for a PFD to go with my new kayak which is on the way – stay tuned for that post!) in the middle of a road trip.


I’d reserved a campsite at Watson Lake, a Prescott city park.  The lake is one of my favorite subjects, and I had high hopes for great light with the storm activity nearby. This campground, though, is not anything like a wilderness experience.  I felt as if I’d parked on the shoulder of Highway 89.  I had an offer to camp in the parking lot of a nearby business last year, and honestly, I think it might have been a bit quieter.


There wasn’t much sun, but I was pleased with some afternoon lightning and moody blue predawn light the next morning before heading home. 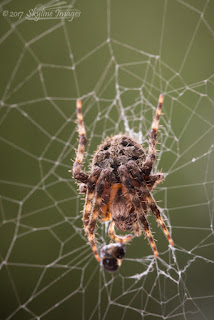 As a little bonus, I discovered an orb spider which had taken up residence on the camper in my driveway the morning after I returned.  He was fun to photograph but I’m afraid to ask what the neighbors think when I hunker down on the driveway with my macro gear.


Up next, a family trip.  I know you’re all looking forward to all those Luna-the-dog-goes-camping pics.


Thanks for riding along.
Posted by Rebecca Wilks at 4:58 PM