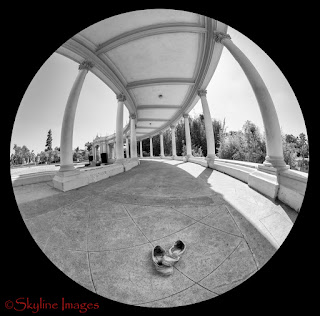 Yeah, I like shoes for the usual frivolous reasons, but there’s something more going on here.

I’ve got an ongoing series of photographs of abandoned shoes.  Each pair (or single shoe) has a story, and as often as not that story is opaque.  These bits of someone’s life, complete with wear unique to the former owner, fascinate me.

It all started on a trip to Balboa Park in San Diego to photograph the Organ Pavilion in morning light.  Someone had abandoned a pair of well-worn pink ballet pointe shoes.  Was she drunk-dancing and wearing out an old pair?  Did she forget them or leave them for dead? Did her sister steal and hide them out of jealousy?  Were they left there for luck?

Do you see what I mean?

After I shot the dance shoes, it started to come together as a series, and I never missed an opportunity to shoot them when I found them.  My arbitrary rules; they had to be found, and I could “pose” them to better reflect the environment, but could not change the context significantly. 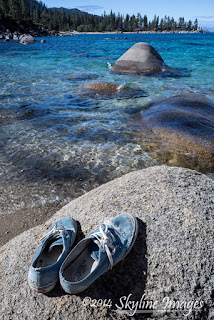 One of my favorites was a pair of Tahoe-blue Vans left on the Lake Tahoe shore.  They seemed to be waiting for their owner to return from a swim or longing to be in the lake themselves. 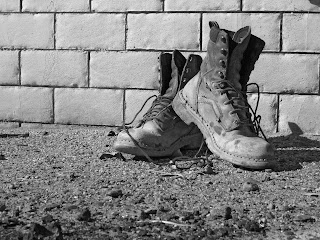 Then there were the work boots propped one-on-another along an irrigation canal in Glendale.  They looked like they had many miles left on them.  The ground was rough – I couldn’t imagine someone walking away barefoot.  Maybe he had an argument with his buddy angling for catfish after work and forgot his work boots as he drove home in his flip flops. 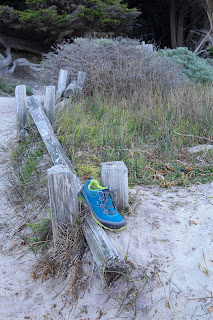 This single shoe, nearly new, was abandoned on the Big Sur coast.  I wonder if she took her shoes off for a swim and left them too close to the water – perhaps the other got washed away.

For the rest, you’ll have to wait until I publish the book.  JK.
Posted by Rebecca Wilks at 9:02 AM