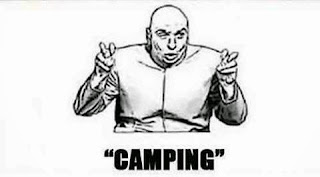 Yes, we really chose a campsite one night at Alabama Hills by driving around looking for the best 3G signal.


Yes, we decided to stay at Panamint Springs Campground more because of the restaurant's legendary beer selection than the hot showers, though we did use the showers.


And yes, we're a little embarrassed to call it "camping" when we have ice cream sandwiches and a propane heater.

My husband and I have a tradition of road trips at Christmas, and the new (as of September) Four Wheel Camper fit in very well.  We can be spontaneous, bring the dog, and have that child-like experience of living in a fort under the dining room table, souped-up with solar power, running water, and four-wheel drive.


There's an awful lot to see in Death Valley NP, which is close to the size of Connecticut.

We started in the civilized part of the Park, camping at Furnace Creek and talking to a ranger about back country road conditions.  After a pause for sunrise at Badwater and a hike up Fall Canyon, we headed out for two nights in the remote Eureka Dunes.  We saw a mere handful of people and were awed by the scale (700 feet tall) and grandeur of the dunes.

We did a little reprovisioning in Bishop and headed for the Alabama Hills (named for a ship, not the state), foothills of the Sierra Nevada with geology similar to Joshua Tree National Park and a backdrop of snow covered Mount Whitney, the tallest peak in the continental US.  15 years ago, I tackled that climb.  I was in better shape then.
We had some disappointing maps, so we spent a few hours looking in the wrong place for one rock arch, but the scenery was fabulous, as was the Milky Way.


We ended the trip with that shower and those beers at Panamint Springs Resort, and took a trip up the Panamint Valley before heading home, wondering where we should “camp” next year.