Snowfall at the Grand Canyon is a magical thing.

So, I hit the road despite the forecasted record lows there.  I’ve noticed that cold is much more easily tolerated in the abstract than in fact.  I thought I could deal.

I’ll be honest up front and say that I had some attitude trouble.  I let the little frustrations get to me and also had a few difficult moments the first time the (unbelievably loud) anti-lock brake system kicked in on the Tundra.  I’d never been on ice in it before.  Seriously, Toyota?  I thought the transmission had fallen out and was dragging on the road.  People were staring.

Sunset Sunday night was a bust.  Often the sun will pass through a break in the clouds just before setting, but not this night. I went to camp with numb feet and no usable images. 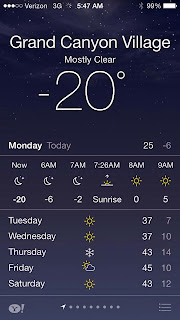 The camper worked well, though the heater did run about all night and this is what I saw when I started moving and checked Yahoo weather on my phone.  There were two couples tent camping in the campground, and they were both huddled around fires as if they’d been there most of the night.  It could have been worse.

I thought maybe I should stop my internal whining, bundle up, and get out there.  Other than the freeze-dried eyeballs, it went relatively well.  There were no clouds, but the clear winter sunrise light was lovely.

I had been looking forward to driving out the Hermit Road, open to private vehicles in winter only, but it was closed because it had still not been plowed.  Instead I took a detour on the way home to see a snowy West Fork of Oak Creek Canyon (near Sedona) which never disappoints.  The temps in the mid-twenties (above zero) felt pretty balmy by comparison.

In summary, I was grumpy, cold, troubled by the vehicle and had marginal light conditions.  I’d do it all again.

Thanks for traveling with me.  See you next time.
Posted by Rebecca at 7:18 AM