What I learned “Out of Chicago.” 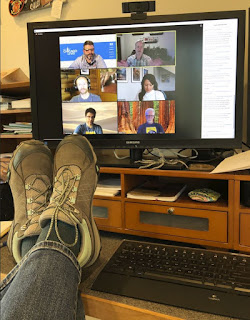 All of us, including photographers, are looking for ways to use our time wisely these days.  The folks from Out of Chicago (a photography education outfit) put together in record time a three-day online extravaganza which aired last weekend.  Not only was it a huge boon for education and inspiration of folks like me, but it offered a way to supplement the income of photographers who, until a few months ago, got most of their income from workshops.  Most workshops have been cancelled.

I offer you some pearls of wisdom from last weekend’s “Out of Chicago Live,” presented with some illustrations that, I hope, will be relevant and entertaining.
Before the conference began, I participated in a photo challenge with Jack Curran.  First, there was a webinar on his particular way of presenting black and white images, and then a challenge to do the same (to the best of our abilities) with one from our archives.  His work is particularly dramatic, and I had a great time re-processing this storm image from Death Valley.
The keynote presentation was from Bryan Peterson, who spoke on color.  The quote of the hour was, “When has a noun ever been exciting?  Shoot the adjective.”  He elaborated that an image of a flower is just documentary, but a much more interesting image will depict shapes, colors, and textures.

Steve Simon spoke on the Art of the Edit, in the sense of choosing our best work.  He said we’re hindered by “emotional metadata,” the memories of the experience which don’t necessarily translate into the image.  He offered this quote from Gary Winograd, from another time technologically but still relevant today; “If I was in a good mood when I was shooting one day, then developed the film right away, I might choose a picture because I remember how good I felt when I took it.  You make better choices if you approach your contact sheets cold, separating the editing from the picture taking as much as possible.”

A little time can make us a bit more objective, though he also says, “We are the best and worst editors of our own work.”

There were two fabulous presentations on Street Photography.  Together with an incredible experience in Guatemalan markets last Autumn, I’m inspired to do more.
The first was from James Maher, an New York-based artist who does a great deal of street photography.  Interspersed with practical advice were gems like, “Street photography is a little creepy but that’s OK.”  He also pointed out that folks doing this work tend to allow technical imperfections like crookedness and spotty exposure, portraying the shortcomings and perhaps grittiness of life.  As he said this, I thought of my Guatemala work, and especially the woman with the pigs.
Marie Laigneau opened her passionate presentation by saying, “Street photography is a journey which starts with the willingness to see the world differently; It’s a paradox.” She urged us to “imagine the possible.”  She addressed the difficulties beginners have with approaching strangers to do street portraits and urged us to “Be fearless.”  On of my favorite bits of technical advice from this talk was her suggestion that “You need a hero inside the crowd,” that is, a clear subject among the chaos.

Unfortunately, there was a panel discussion which mostly taught by mis-example.  The subject was processing images, but two panelists made the dubious point of saying how hard they worked.  One bragged about “chasing away bears,” and the other about “spending hours” removing vegetation he didn’t like from the foreground at one location, and (again “spending hours”) wading in the water removing leaves he didn’t like from the Subway in Zion National Park.  So much for Leave No Trace Principles.
Elder statesman and Yosemite local William Neill talked on thinking in themes.  In addition to the opportunity to ponder his inspiring work, he said, “You have to give yourself permission to let emotions into your photographs.”  And, even better, “It’s OK and normal to be in a rut.”

Finally, he talked about openness to photograph whatever presents itself as the antidote to expectations, which can sap creativity, “My approach is not to expect a photograph – if I do my interest level and enjoyment drop.  I don’t go out with a particular image in mind [and] the editing for themes comes much later. My goal is to see the beauty around me as a daily practice, and if I stay connected to that purpose, I know the images will come.”

The Out of Chicago people have made recordings available to registrants for a year, which is a good thing because each session had 10-12 simultaneous options and I’m excited to go back and see more.  Between that and trying out new ideas, I’ll be busy until the April 2021 second annual Out of Chicago Live.
Posted by Rebecca Wilks at 12:32 PM