A Real Emergency Trumps a Fake One; Tales From the Road 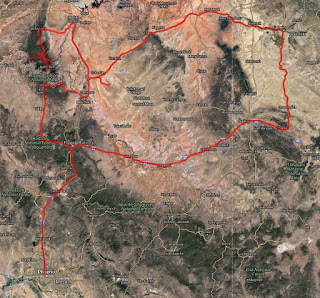 Hmm.  Did I make you curious?

The last afternoon of my just-completed week long road trip was reserved for an odd volunteer experience.  I was to pretend to be a victim in a Mass Casualty Incident Drill (MCID) at the Grand Canyon (South Rim) Emergency Response Station.  The timing was perfect to do this on the way home, and it sounded like a fun, unusual experience.  I came down from the North Rim the day before and had a chance to photograph several times before the drill.  More on that later.

I met my fellow victims, with whom I was to fake injuries after a fake collision with a fake school bus.  The bus passengers would be played by students from the local high school.  I anticipated fake blood and maybe even a fake fracture.  The point is to create fake chaos for the trainees, and to provide feedback afterward on their performance.  Fun, right?

Waiting for the final details, we heard a call on the radio about a real emergency; a hiker had apparently had a heart attack on the Bright Angel Trail.  The Drill was cancelled as the instructors, the real rescuers, went to this person’s aid.

This trip started at Bisti Badlands, a fascinating moonscape on BLM land in northwestern New Mexico.  I joined a camping trip & workshop with Colleen Miniuk-Sperry and sponsored by Arizona Highways Photo Workshops.  I’d never been there and especially appreciated the guidance.  Apparently people get lost here regularly.  The comradery was great, though I did feel a little guilty, warm in my camper when several of my new friends were in tents.  The low temperature was 34F.   In my own defense, I did lend out my spare sleeping bags.  We had some minor hardships; rain Friday made a bit of a muddy mess and the large group size, unfortunately the norm for AZHPW, can be frustrating as I frequently abandoned compositions because there were people in them, or because others asked me to move out of theirs.

So, I was ready to change gears and travel on my own.  Next stop, Coal Mine Canyon on the Navajo Reservation.  This beautiful spot requires a permit from the Nation, but I appreciated camping alone on the brink of the canyon, and especially the sunrise light.

This was my last trip of the season to Grand Canyon North Rim, which closes November 15 or with the first major storm (whichever comes first).  I thought I’d be a little early for peak fall color but as it turns out the timing was just right.  I drove out FR 610 looking for the aftermath of the Fuller Fire.  The most striking thing was ten-plus miles of shredded forest along the road, the fire break created last summer.  I do understand the need for this, but am still rather sad about the damage to one of my favorite spots.

Fire Point is a fabulous forested remote spot on the North Rim. Most of the 17-mile dirt road drive is in the National Forest, but the last mile is National Park.  That last mile was never good, but has deteriorated quite a bit since last season, including impressive muddy quagmires.  I was commenting on the change to a British Expat I met out there when he told me that he last found this spot 25 years ago.  Apparently the “road” was hardly discernible then.  Here I found peace and an amazing nap.  I sketched out a list of adventures I’d like to have at the North Rim next season.

Finally, I set up at Desert View, on the Eastern part of the South Rim. I love this spot, both for the views of the Colorado River upstream and for the namesake watchtower, designed by Mary Colter for the Fred Harvey Company.  Thunder started as I was setting up camp, and soon I was getting drenched on the rim of the Canyon, my mind blown away by sheets of rain, crazy light, and rainbows.  I’ve written about photogasms before, and I’ll have to add this afternoon to my list.  The following morning at Lipan Point was magical as well with breathtaking Grand Canyon fog.

Real experiences, all.  Thanks for coming along.

Posted by Rebecca Wilks at 9:48 AM