I never used to be spontaneous, but last week I switched up plans for a Death Valley camping trip in the middle of a Pilates class while wrestling with reports of big crowds (spring break) and not much bloom at higher altitudes, where I wanted to be.  Besides, a March trip would break my DV rule; November through February only.

So there I was, doing one-legged bridges, when I thought of the beach and of a guaranteed place to sleep, shower and park.  The ultimate glamping trip.

I grew up in San Clemente California, a beach town in southern Orange County.  Nobody has lived in that condo in a long time, but the family uses it fairly regularly, especially on weekends.  I thought I’d revisit some of my old haunts photographically during a rare opportunity to be there on my own.

I loaded up my bicycle and camera gear and hit the road.

The place has some emotional overtones for me.  I spent my middle and high school years here, a complex time in my family.  Those memories now have the distant tone of the troubles of a character in a familiar novel, even sitting here in the middle of what might be called the crime scene.  Still, I’ve been putting the stamp of my current life here these last few days, biking and hiking and walking.  As I spoke to my sister about it, I realized I’ve been marking territory in a way.  Reclaiming it with the camera. 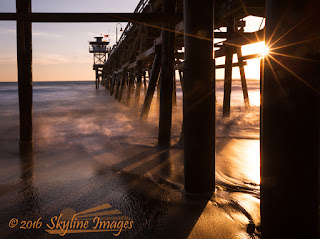 San Clemente’s Pier is its chief icon, rebuilt after severe damage during the 1983 El Nino storms but still in the spirit of the original structure, used for 1920s rum running in the city’s infancy.  I photograph it a lot.

Dana Point Harbor is just five miles or so up the coast.  It’s home to the Ocean Institute including the photogenic Brig Pilgrim, a replica of the tall ship made famous by Richard Henry Dana, the Harbor’s namesake.  She was featured (apparently as more than one vessel) in Spielberg’s 1997 film Amistad. The harbor’s jetty was built in the 1960’s, essentially transforming the former surfing beach Doheny into a lake.  Some local surfers are old enough to remember and complain still about their loss.

Since I left in (ahem) 1980, some changes have taken place in my home town.  The 1970 census showed the population here to be 17,000.  Today the number of inhabitants has nearly quadrupled as subdivisions have marched inland into the hills.  City planners have taken advantage of the sprawl, building a network of trails through town.  I had a lovely afternoon hike along the Rancho San Clemente Trail, apparently a remnant of a ranch road from the old Rancho Santa Margarita.  The odd fence post and stock tanks remain, serving as foreground to neighborhoods on one side and the gigantic Marine Base Camp Pendelton on the other.  Mysterious non-native flowers (geraniums and asters) inhabit a hilltop.  Google has not cleared this up for me, but I found them to be lovely focal points for a few images.

I’m getting ready for my return home as I write, and, as is the mark of a great photo trip, with a long shot list for next time.  In some ways it’s good to leave something on the table.

More South Orange County images are in the Sothern California Gallery on the website.
Posted by Rebecca Wilks at 4:36 PM