No. I really couldn't get enough of the Grand Canyon.  Five days after arriving home with my dirty river gear (minus the disintegrated ancient rain pants and 'retired' river hat), I hit the road again.

I'd been thinking about the May 20 annular eclipse for months.  At first I thought about camping out at Horseshoe Bend, near Page AZ.  I was concerned about the crowd there and about the attractiveness of the foreground.  I'd considered scrapping the whole enterprise when I discovered that Chuck, one of my new river friends, had plans to camp out at Lipan Point (near Desert View in Grand Canyon National Park) Sunday.  Excited about the prospect of company and of the GC as foreground, I signed on.

You'd never know that Chuck and I had been friends for all of two weeks.  He generously offered the shade, power, and fridge of his camper for the nine or so hours we spend at Lipan.  No roughing it for us.

It became clear early on that this was going to be a star party.  Serious astronomers showed up as early as the photographers to set up their equipment (heavier than mine!) and to share telescopes and knowledge.  We learned about Baily's Beads (irregularities in the eclipse profile due to mountains on the moon), solar filters, Venus, and all manner of delightful star-gazer stuff.  When the eclipse began, there were joyous shouts of "first contact!"

Eventually there were 40 or so folks enjoying the show.  It was perfect.  Fun, but not claustrophobic.

I settled on dedicating one camera to creating a wide-angle composite view which included the canyon (below) and using the other camera for 600 mm individual views of the eclipse (seen in the composite above). 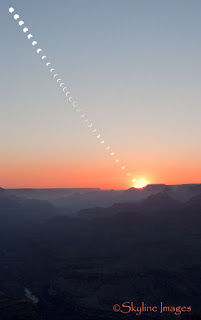